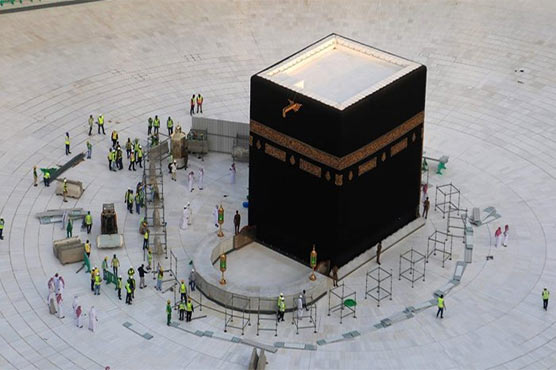 The hajj, one of the five pillars of Islam

MAKKAH (AFP) – Muslims will on Wednesday embark on the annual hajj pilgrimage, one of the five pillars of Islam, which this year takes place on a greatly reduced scale due to the coronavirus pandemic.

The holy city of Makkah, where more than two million believers usually converge for several days of rituals to retrace Prophet Mohammed’s (PBUH) last pilgrimage, will be open to no more than 10,000 people.

The government has tightened access to Makkah and put in place strict health restrictions to prevent the spread of the disease. Saudi Arabia has recorded more than 260,000 cases of the novel coronavirus, with more than 2,700 deaths.

All Muslims who are able to are expected to complete the pilgrimage to Makkah at least once in their lives.

Here is a rundown on the rituals of the hajj, which is usually one of the largest gatherings in the world and is closed to non-Muslims.

Pilgrims must first enter a state of purity, called ihram, which requires special dress and behaviour.

Men wear a seamless shroud-like white garment that emphasises unity regardless of social status or nationality.

Pilgrims are prohibited from wearing perfume, cutting their nails, trimming their hair or beards, or arguing.

The first ritual requires walking seven times around the Kaaba, a large black cubic structure at the centre of Makkah’s Grand Mosque.

Made from granite and draped in cloth, the Kaaba stands nearly 15 metres (50 feet) tall.

Believed to have first been erected by Adam and then rebuilt by Abraham 4,000 years ago, it is towards the Kaaba that Muslims turn to pray wherever they are in the world.

Pilgrims next walk seven times between two stone spots in the mosque.

They then move on to Mina, around five kilometres (three miles) away, ahead of the main rite of the pilgrimage at Mount Arafat.

The climax of the hajj is the gathering on Mount Arafat, about 10 kilometres from Mina, where it is believed that Prophet Mohammed (PBUH) delivered his final sermon.

Pilgrims assemble on the 70-metre-high hill and its surrounding plain for hours of prayers and Koran recitals, remaining there until evening.

After sunset they head to Muzdalifah, halfway between Arafat and Mina, where they gather several dozen pebbles to perform the symbolic “stoning of the devil”.

‘Stoning of the devil’

The last major ritual of the hajj is back at Mina where pilgrims throw seven stones at each of three huge concrete walls representing Satan.

The ritual is an emulation of Abraham’s stoning of the devil at the three spots where it is said Satan tried to dissuade him from obeying God’s order to sacrifice his son, Ishmael.

After the first stoning, the Eid al-Adha feast of sacrifice begins, marking the end of the hajj.

Sheep are slaughtered, in reference to God’s provision of a lamb for sacrifice instead of Ishmael, in a ceremony held at the same time around the world.

Men then shave their heads or trim their hair while women cut a fingertip-length off their locks.

The pilgrims can change back into normal clothing, returning to circumambulate the Kaaba and complete their stone-throwing rituals before heading home.

The hajj is the last pillar of Islam and required by every Muslim at least once in their lifetime, if they are healthy enough to do so and have the means.

The four other essential pillars are: profession of the faith; daily prayers; alms-giving; and fasting from dawn to dusk during the holy month of Ramadan.