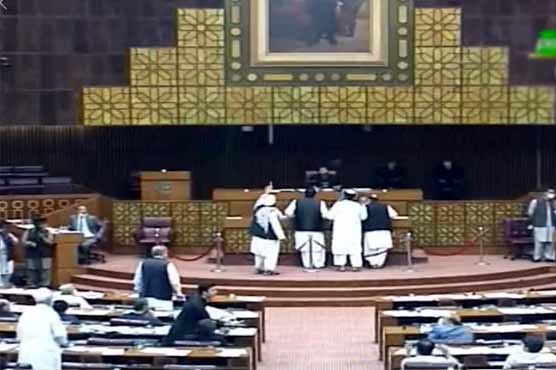 ISLAMABAD (City News) – Session of National Assembly has been marred by the ruckus yet again after opposition and treasury benches exchanged harsh words.

The foreign minister said nobody will address the house if he is not allowed to speak. The opposition disappears when Federal Minister for Communications and Postal Services addresses the NA, Shah Mahmood Qureshi said.

Members of Jamiat Ulema-e-Islam-Fazl (JUI-F) staged a protest in front of Shah Mehmood Qureshi after NA Speaker gave him chance to speak.

The opposition members started chanting slogans when the Federal Minister for Communications Murad Saeed started his speech. He said there will be no compromise on accountability and no NRO will be extended to anyone.

The minister said it is regrettable that the opposition parties want NRO and are doing politics for extending support to an important legislation meant for national interest of the country.

Murad Saeed said no concession will be given to those who have plundered Pakistan.

He further said that Pakistan was added to grey list due to money laundering and looting, adding that the opposition uses parliament to cover up its corruption.

He went on to say that FM Shah Mehmood Qureshi wants to explain his position but opposition members doesn’t even have courage to listen him.

PML-N leader Khawaja Asif while addressing the National Assembly said that the accountability laws seem only to apply when the opposition is to be targeted.

He said that history shows that those who make wrong laws fall victim to them. We do not want the government to be targeted by such laws in the future,” he said.

While taking a jibe at the foreign minister, he said Shah Mahmood Qureshi had “crossed all the limits by disclosing details of the meeting which should have been kept secret” because the minister “wanted to do politics”.

The PML-N member said the impression was given that opposition parties are trying to create hurdles for NAB law. Khyber Pakhtunkhwa (KP) is a heavenly place where only angels live. All the honest leaders are residing there, he taunted.

Khawaja Asif said that some political personalities are nothing more than a curse. We only want to end the tradition of filing fake cases against opposition leaders. PML-N’s Rana Sanaullah was illegally booked in drugs case, he went on to say.

Khawaja Asif said history tells that those who make wrong laws, they ultimately fall prey to it. We are only demanding amendments in the laws, he clarified.

The PML-N leader further added that the government is setting new example of corruption by giving immunity to its ministers in BRT and Malam Jabba projects.