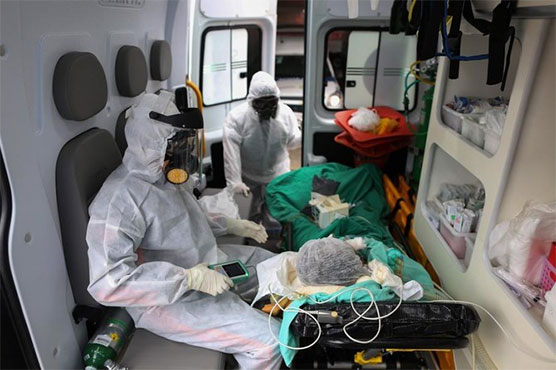 MONTEVIDEO (AFP) – Latin America and the Caribbean surpassed Europe on Friday to become the region hardest-hit by coronavirus deaths, as India passed the sombre step of recording over two million infections.

The world s worst-hit region had reported 213,120 fatalities, 460 more than Europe, according to an AFP tally based on official data registered at 1700 GMT.

Worldwide there have been more than 19 million cases and over 715,000 deaths from the virus first reported in China at the end of last year.

The virus has flared up again in areas where it appeared to have been curbed, but it has steadily spread across sprawling territories in India and Africa.

It was only the third country after the United States and Brazil to surpass two million cases. Official figures show the world s second most populous country has also recorded 41,500 deaths.

But with the economy in tatters, restrictions have been steadily eased.

Experts say the true number of cases and deaths are grossly under reported as the cause of death in the country of 1.3 billion people is rarely properly recorded.

What s more, the stigmatization of those infected puts off many from getting tested.

“There s both the fear of the disease as well as of isolation and quarantine,” Rajib Kumar, who heads the Centre of Social Medicine and Community Health at Delhi s Jawaharlal Nehru University, told AFP.

However, there are some positive indicators in Africa, where health authorities warned against complacency amidst hopes that the pandemic is peaking in some countries.

“African countries are doing their best, despite… limitations,” such as weak health systems, Mary Stephen of the World Health Organization Africa office, told AFP on Friday.

Some countries have seen declines of around 20 percent in cases but there remain fears of a second wave.

“Because we don t see many people like we used to see in Italy, like 1,000 people dying (a day), people tend to relax, they think the risk is not so much in Africa,” said Stephen in a phone interview from Brazzaville.

The world is putting its hope that an effective vaccine will be available sooner rather than later.

Up to 100 million COVID-19 vaccine doses could be made available for poorer countries by 2021, announced Gavi, the Vaccine Alliance.

The vaccines, priced at a maximum $3 per dose, would be produced at the Serum Institute of India.

In Latin America, which is already the region with the largest number of cases at 5.3 million, deaths continue to soar.

Only the United States has been worse hit.

In the United States, New York Governor Andrew Cuomo said schools could reopen this fall if they meet certain criteria.

Schools in several US states have reopened for in-person classes — but some have already been hit by large quarantines of students and staff following fresh outbreaks.

The US economy regained 1.8 million jobs in July, according to government data, and the unemployment rate fell to 10.2 percent.

But with COVID-19 cases spiking in several states economists raised concerns that the labor market could ake a turn for the worse.

International sport continues to be affected by the virus despite many professional events restarting.

Organizers of the world cycling championships, set for Switzerland next month, warned the event may be called off because of local health rules.