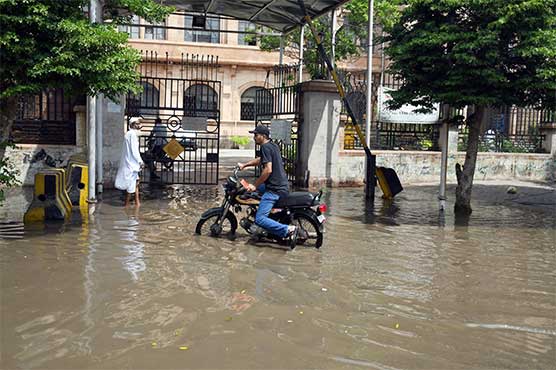 KARACHI (City News) – Inundated streets have made the lives of Karachiites difficult after rain and water entered into homes as sewerage nullahs have overflowed, Dunya News reported on Saturday.

Pakistan Army reached the affected areas to help the civil administration, which acted like a mere spectator, as the new monsoon spell has disrupted routine life in the metropolis.

The Inter-Services Public Relations (ISPR) told that the army has started relief operation in Karachi as rescue teams are active in affected areas with dewatering pumps and necessary safety equipments.

Rainwater is being drained out from low-lying areas and stranded people are being rescued. Further rescue teams have been alerted in the wake of flooding or any other emergency situation.

On the other hand, the number of people who have been electrocuted in rain related incidents has surged to eight. The mishaps occurred in Ittehad Town, Gulistan-e-Johar, City Court Road and Jam Colony.