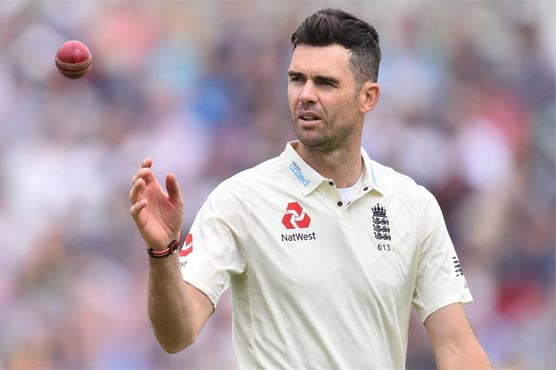 Anderson recently turned 38, an age where many previous pace bowlers would have long since retired.

Given his age, Anderson’s meagre match haul of 1-97 during England’s three-wicket win in the first Test against Pakistan completed Saturday inevitably led to speculation about his future.

By his own admission, Anderson, England’s all-time leading wicket-taker, “did not bowl very well” at his Old Trafford home ground, where one of the ends is named after him, as England went 1-0 up in a three-match series.

But the swing specialist, whose 590 wickets are the most taken by any paceman in Test history, said he should not be written off after one poor game.

“I want to play as long as I possibly can,” Anderson told reporters during a conference call on Monday.

“If I keep bowling the way I did this week, the opportunity to retire will be taken out of my hands. It will be a selection issue,” he added ahead of Thursday’s second Test at Southampton.

“I’m still hungry to play the game. I think the frustration for me this week was that, after one bad game….the sort of whispers (about retirement) that go around, I don’t think that’s really fair.”

Reflecting on his own performance in the first Test, Anderson said: “It’s one of those things, everyone has a bad game, every now and then.

“I’ve not bowled very well and felt out of rhythm. For the first time in probably 10 years I got a little bit emotional on the field, got a bit frustrated, let it get to me a little bit.

“It reminded me of when I first started playing, when you get frustrated and a little bit angry you try to bowl quicker and quicker and it doesn’t help.

“Hopefully, I can show people I’ve still got what it takes to play Test cricket.”

Anderson, a veteran of 154 Tests, added: “I don’t think it’s the toughest period of my career. I’m sure I’ll have another bad game in my career.

“I just don’t want every time I have a bad game for there to be whispers going round that I’m going to pack in.”

Anderson is now in sight of becoming the first pace bowler to take 600 Test wickets and overhauling the England Test appearance record of 161 held by retired former captain Alastair Cook, one of his best friends in cricket.

“I want to be bowling well and contributing to England winning games of cricket,” said Anderson. “That’s been my focus throughout my career and will continue to be my focus.

As for surpassing opening batsman Cook’s cap record, which would be a remarkable achievement for a pace bowler, Anderson said: “154 does sound like quite a lot of games. But I feel like I’ve still got quite a few more left in me.

“If I can go past Cooky it will probably be the one thing I’ve got up on him.”

Most Asia markets rise but trade talks, stimulus cause worry

Frustrated and disappointed but we shouldn’t be mentally down: Misbah