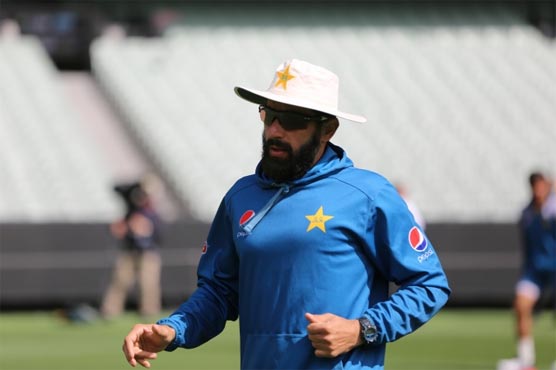 Frustrated and disappointed but we shouldn’t be mentally down: Misbah

MANCHESTER (City News) – Pakistan head coach and chief selector Misbah-ul-Haq said we are feeling frustrated, just as the fans are, after the Old Trafford Test match but this is how cricket is. “There are very small margins between victory and defeat and it’s easy to curse yourself when you’ve lost,” an official press release quoted him as saying.

“But, we should remember that we were right on top until pretty much the last session of the game and we played very good cricket. Sure, we need to improve 10 to 15 per cent and deal with pressure situations a little better but we shouldn’t be mentally down.

“There is disappointment, of course, but we must not keep that feeling in our minds otherwise it will be difficult to come back but the team believes we can fight back.

“It was a thrilling Test match and full credit must go to England for the way they fought back, came from behind and took the game away from us. There was wonderful cricket played by both teams. Sometimes luck doesn’t favour you, sometimes the opposition plays well – that’s the beauty of the game.

“If we look back at the whole Test match, we controlled most of the sessions until the last one. You could say one session in our second innings had a big say and then obviously the partnership of Chris Woakes and Jos Buttler. They counter-attacked well and there was a bit of inexperience – and even panic – in the team that cost us.

“There has been debate about whether we could have bowled more short stuff or we could have bowled Shadab Khan earlier. Maybe so, but you also have to remember that Woakes and Buttler did have quite a lot of luck in that partnership. A lot of balls went here and there, into no man’s land. If one of those goes to a fielder then the situation could have been very different.

“We still need to improve, of course, but overall we fought really well against a top team in our first international fixture for six months.

“It was a brave decision to bat first against England’s bowling attack in those conditions. Shan Masood batted really well and it was great to see his partnerships with, first, Babar Azam and then Shadab Khan that shifted the momentum.

“Shan should be given a lot of credit for his innings. He has been working so hard – with coaches Shahid Aslam and now Younis Khan – ever since I took the coaching job last September. He’s changed a few things in his basic set-up and his approach to batting in South Africa and then Australia. He’s a different batsman now and Younis has helped him too. They have a good relationship from batting together at Pallekele back in 2015 when Shan made his first Test hundred.

“The bowling was also excellent. It’s a young seam attack, apart from Mohammad Abbas, and both Shaheen Shah Afridi and Naseem Shah did really well. Yasir Shah bowled well in both innings and it’s great to see him back in such good form after a period of struggle. Those are positive signs for us. We fielded well, which was another plus, and Mohammad Rizwan was outstanding behind the stumps.

“All the bowlers seem fine at the moment. They bowled a decent amount of overs but not too much so I don’t think there are issues of fatigue at the moment. But let’s see how everybody is feeling just before the match, how the conditions are and we will decide accordingly.

“This is an unusual tour, of course, but we are feeling very happy and comfortable in the ‘bubble’. We are spending a lot of time together, which has allowed the group to bond well. We eat all our meals together and have enjoyed some very competitive games of table tennis and pool! There are some excellent table tennis players in the group, particularly Imam-ul-Haq and Imad Wasim.

“My message to the fans is that you have given us excellent support from back home so far and we thank you for that. Please keep supporting Pakistan and we will do our best to come back in this series, which I really believe this team is capable of doing.”