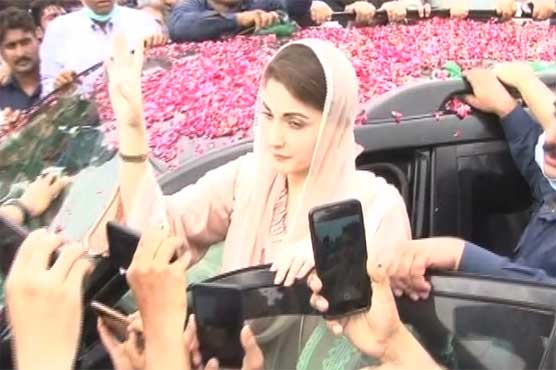 A clash had erupted between outraged PML-N workers and police as Maryam Nawaz reached at the NAB office today. The PML-N leader left the NAB office premises without appearing before the accountability bureau and then came back for the second time.

While talking to media Maryam Nawaz said that she will not go back without answering the NAB questions as wrong allegations have been leveled against her.

“Police threw stones at my car which broke its screen. I am here to give answers to the NAB questions. Why did you summon me if you are so scared? Now have some courage to listen to me,” the PML-N vice-president said.

According to officials, PML-N workers – who accompanied Maryam Nawaz from Jati Umrah to the NAB office in a convoy – pelted stones at police officials and tried to break the barriers outside the anti-corruption watchdog’s office.

Following the violent situation, the National Accountability Bureau has postponed Maryam Nawaz’s hearing and has decided to file cases against the demonstrators. Gates of the NAB office had been closed.

Sanjay Dutt is fine, showing no other symptoms: Lilavati Hospital