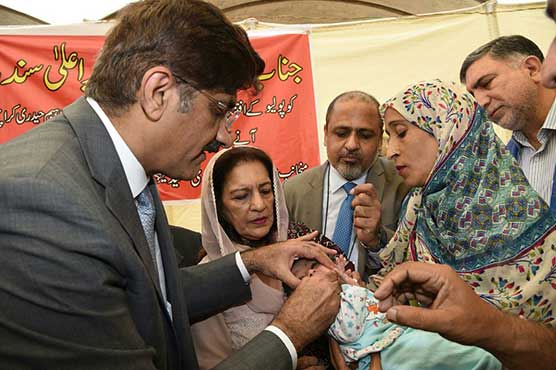 KARACHI (City News) – Sindh Chief Minister Syed Murad Ali Shah Saturday said that polio has been eradicated from the whole world, except Pakistan and Afghanistan, therefore we as a nation have to join hands and resolve to eradicate this crippling disease from our country.

This he said in a video message, after inauguration of week-long anti-polio virus campaign by giving polio drops to some children here at CM House and also administering them the Vitamin-A drops to strengthen their immunity level.

Murad Ali Shah said that the entire world has eliminated polio from countries, except Pakistan and Afghanistan which was quite painful. “This is a crippling disease and cripples would children, but sorry to most of the parents do not cooperate with the government to administer polio drops to their children,” he said and added this year 64 cases of polio have been detected from Pakistan, of them 21 belonged to province of Sindh.

Syed Murad Ali Shah urged people of the province to cooperate with the polio teams which would visit them under their `door-to-door’ campaign to administer polio drops to under-five-year children. “We all have to join hands to eradicate polio to save our children from physical disability,” he said and urged parents to administer polio vaccines to their children under COVID-19 SOPs.

Following the COVID-19 SOPs, the chief minister personally sanitized the hands of the children whom he gave polio and vitamin A drops and wore them masks.

The Emergency Operation Centre (EOC) for Polio in Sindh has started a province wide Oral Polio Vaccine (OPV) campaign from the 15 to 21 August 2020.

The campaign will take place in all 29 districts of Sindh with a total target population of 9,2 million children under 5 years of age.

In addition to OPV, 8.3 million children from six months to five years of age will also be given Vitamin A drops to boost their immunity levels.
A total of 49,781 polio workers and 8497 area supervisors will be deployed in the province for house to house vaccination.

All COVID prevention SOPs will be followed during the campaign which includes checking of workers temperature before being deployed, use of hand sanitizers, workers will not handle the children directly and will knock on doors using a pen or ruler rather than their hands.

“lt is absolutely necessary that children receive these life-saving vaccines and l request all parents to step forward and allow polio teams to administer polio drops plus vitamin A to children aged under 5 years and also compete the routine immunization course for their children,” Murad Ali Shah said and added “this is what we need to ensure a healthy future for the children of Sindh and the children of Pakistan.”