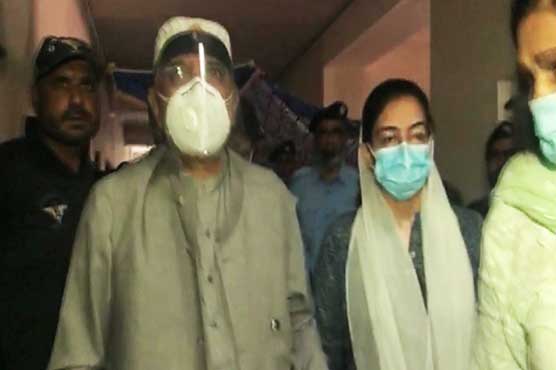 According to details, accountability judge Asghar Ali heard the case during which, Asif Ali Zardari appeared before the court while former Prime Minister Yousaf Raza Gillani and Omni Group Chief Executive Officer (CEO) Abdul Ghani Majeed were also directed to ensure their presence in the next hearing.

The PPP leader had earlier decided to skip the appearance after which the court had ordered his counsel Farooq H Naek to call him to attend the case proceedings at any cost. Following the directives, the ex-president arrived at the court and participated in the hearing.

PPP chairman Bilawal Bhutto Zardari and other party leaders including Sherry Rehman and Qamar Zaman Kaira were already present in the court to express support for Asif Ali Zardari.

On the occasion, strict security arrangements were taken to avoid any untoward incident as PPP activists thronged the court in large number.

The workers also exchanged harsh words with security personnel after they were not allowed to enter the court premises and stopped at Srinagar Highway.

Zardari had only paid 15 percent cost of the cars by using his fake accounts, however, Libya and United Arab Emirates (UAE) also gifted him cars when he was serving as president, he told.

NAB official alleged that Asif Ali Zardari used these cars for his personal work instead of submitting them to Toshakhana.

The warrants were released on the request of NAB prosecutor.

The court had also issued advertisement of PML-N supremo and ex-Prime Minister Nawaz Sharif for declaring him as proclaimed offender.

The former prime minister requested the court to nullify the accountability court’s decision to advertise his summons in the case and continue his trial through a representative.

He argued that he is not a fugitive and has gone abroad for medical treatment after obtaining bail from court.

The PML-N supremo maintained in his petition that the NAB is targeting the opposition to silence its voice.

The anti-graft watchdog had also frozen the ownership of Asif Zardari’s three vehicles including two BMW and one Lexus car.