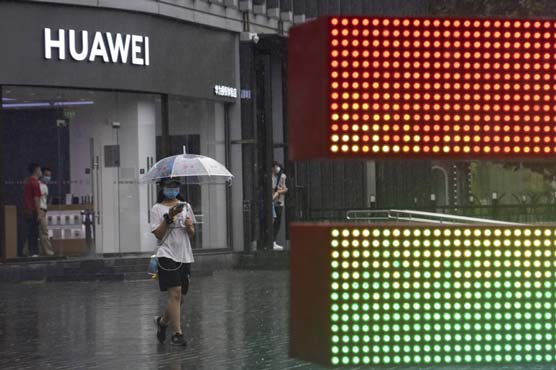 Focusing on Europe, Asia, Africa and China’s booming market, Huawei became the biggest maker of switching gear and a major smartphone brand. As the White House cut off access to American components and Google’s popular music and other smartphone services, Huawei unveiled its own processor chips and app development. Last year’s sales rose 19% to $123 billion.

Now, Huawei Technologies Ltd. is suffering in earnest as Washington intensifies a campaign to slam the door on access to foreign markets and components in its escalating feud with Beijing over technology and security.

European and other phone carriers that bought Huawei gear despite U.S. pressure are removing it from their networks. Huawei got a flicker of good news when it passed rivals Samsung and Apple as the No. 1 smartphone brand in the quarter ending in June thanks to sales in China, but demand abroad is plunging.

“Huawei is losing market share quite dramatically outside China,” said industry analyst Paul Budde. “Their international position is most likely going to get worse rather than better.”

In the latest blow, the Commerce Department this week confirmed rules announced in May that will bar non-American companies from using U.S. technology to make processor chips and other components for Huawei without a government license.

The president of Huawei’s consumer business, Richard Yu, says it is running out of chips for smartphones. Yu said as of Sept. 15, contractors will be forced to stop making Kirin chips designed by Huawei’s engineers and used in its most advanced handsets.

Yu did not say how sales might be affected. Huawei declined comment on how it was responding.

Huawei heads a growing list of Chinese tech names the Trump administration is targeting as security risks in an initiative dubbed “Clean Networks.” It wants countries to remove them as suppliers to telecom systems, undersea cables and smartphone app stores.

In June, the Pentagon added Huawei and video surveillance company HikVision to a list of companies it said were owned or controlled by the ruling Communist Party’s military wing.

Last year, the Chinese owner of Grindr was ordered to sell the dating app.

Huawei is hardly finished. It says sales rose 13% to 454 billion yuan ($65 billion) in the first half of 2020. And China is one of the biggest markets. But after spending a decade and billions of dollars to become a leader in next-generation

technology, the company that says it serves 45 of the top 50 phone carriers faces the threat of being shut out of many major markets.

That is a setback for the Communist Party’s ambition to make China a global tech leader.

Western companies and consumers also may lose access to Huawei’s creativity and network gear that can cost 30% less than that from its rivals Ericsson AB of Sweden and Finland’s Nokia Corp.

U.S., European and Japanese suppliers of processor chips and other technology stand to lose billions of dollars in potential sales to Huawei.

“It doesn’t benefit any country to exclude Huawei,” said Nikhil Batra of IDC.

The Trump administration is ramping up pressure on European and other allies, including by threatening to withhold intelligence sharing if they allow Huawei into next-generation, or 5G, networks.

Huawei’s U.S. market evaporated after the company and Chinese rival ZTE Corp. were declared security threats in 2012 by a congressional panel. Small, rural carriers still use Huawei’s lower-cost equipment, but Washington is prodding them to stop.

American officials say buying a 5G network from China is too risky because vendors need round-the-clock access for repairs and upgrades. “Clean Networks” cites Huawei as part of the Communist Party’s “surveillance state.”

“We call on all freedom-loving nations and companies to join the Clean Network,” said Secretary of State Mike Pompeo.
Last year, Huawei raced to remove American components from its products after President Donald Trump blocked access to U.S. processor chips and other technology including Google services. Huawei, ranked No. 6 on Boston Consulting Group’s list this year of the most innovative global companies, said sales went ahead without disruption.

The White House’s restrictions on use of U.S. technology to produce chips and other components for Huawei is more painful.

The Communist Party has fought back by threatening unspecified consequences against countries that block Huawei’s market access.

After the latest sanctions, the foreign ministry called on Washington to “stop suppressing Chinese companies.”

“The more hysterical the U.S. suppression of Huawei and other Chinese companies, the more it proves the success of these companies and the hypocrisy and arrogance of the United States,” said a ministry spokesman, Zhao Lijian.

The party also is stepping up a decades-old campaign to build up China’s own chip-making industry. This month, Beijing announced new tax breaks for semiconductor makers.

In Europe, which supplied one-quarter of Huawei’s 2019 sales, Germany and France are deciding what role it can play in 5G. Britain agreed in January to a limited presence but changed course in July and banned Huawei from its mobile networks.

“There is a bit of panic” among European carriers, said Budde. “There are hectic negotiations” with other suppliers.

Vodafone has warned that rolling out 5G in Europe could be delayed by up to five years if other governments impose British-style limits.

“It would be hugely disruptive,” CEO Nick Read said in February.

Australia has banned Huawei from 5G networks. Japan, Taiwan and others are limiting use of Huawei technology.

The United States, Australia, Japan and other governments are discussing how to reduce reliance on China. A bill before the U.S. Congress would spend up to $1 billion to develop a software-based 5G to operate over traditional networks.

Huawei celebrated, lauding its own “exceptional resilience,” when Canalys reported it had become the top-selling smartphone brand for the first time.

But those gains came from its home market. Sales outside China fell 27% from a year earlier.

Huawei has stepped up sales efforts in Russia, Turkey and other markets that are smaller but friendly with Beijing, said Ben Stanton of Canalys.

Those are the “biggest opportunities if the main bloc of Western countries turn away from them,” he said.

How will office life be different in a pandemic?