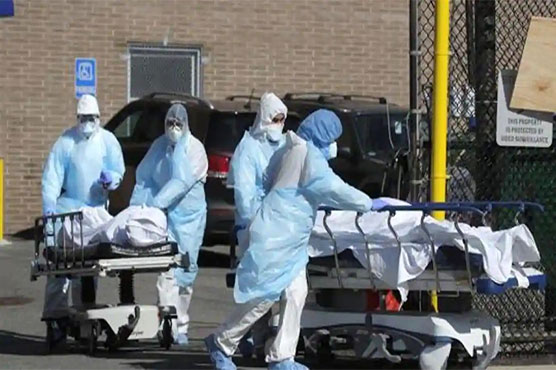 PARIS (Agencies) – More than 23 million people have been reported to be infected by the novel coronavirus globally and over 800,000 have died, according to global trackers on Friday. Global recoveries stand at over 15.6 million.

Infections have been reported in more than 210 countries and territories since the first cases were identified in China in December 2019. The United States has suffered the most deaths, followed by Brazil, Mexico and India.

Here is a weekly roundup of developments in the coronavirus cases and deaths.

India, the United States and Brazil are the three countries which have registered the biggest number of new infections over the past seven days, with an average of 62,900, 46,700 and 39,600 per day respectively, according to an AFP tally at 1100 GMT on Friday.

Things are improving in the United States and Brazil where cases have decreased by 11 percent compared to the last seven-day period, while there is a slight deterioration of two percent in India.

The number of confirmed cases only reflects a fraction of the actual number of infections, with different countries having differing counting practices and levels of testing.

Ethiopia is the country where infections are picking up most, with an increase of 82 percent, or 1,400 new cases a day, among those which have registered more than 1,000 daily cases over the past week.

By region, the rate of infections is picking up in Europe, with an increase of 15 percent over the previous week, in the Middle East (seven percent), and Asia (two percent). It is dropping in Oceania (-20 percent), the United States and Canada (-11 percent), Latin America and the Caribbean (-six percent), and Africa (-five percent).

At the world level the pandemic is slowing down slightly, with a drop of two percent, with 255,000 new cases per day.

The pandemic has killed at least 793,847 people since late December out of more than 22.7 million confirmed cases.