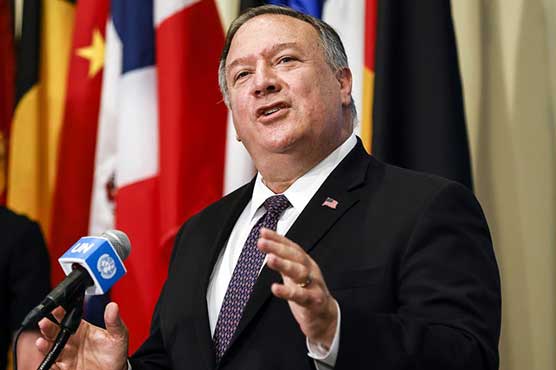 JERUSALEM (AFP) – US Secretary of State Mike Pompeo arrived in Israel on Monday to start a five-day Middle East tour focused on Israel’s normalising of ties with the United Arab Emirates and pushing other Arab states to follow suit.

Pompeo, wearing a face mask in the colours of the US flag, was due to meet Prime Minister Benjamin Netanyahu and in coming days also visit Sudan, Bahrain and the UAE, the State Department said.

Washington and its close ally Israel hope that the Jewish state will soon be able to normalise ties with other regional countries, including several that share their deep animosity with Iran.

In Jerusalem, Pompeo and Netanyahu were due to discuss “regional security issues related to Iran’s malicious influence” and “establishing and deepening Israel’s relationships in the region,” the State Department said.

Netanyahu said Sunday he and Pompeo would talk about “expanding the circle of peace in our region … We’re working on peace with more countries, and I think there will be more countries — and in the not-so-distant future.”

Israel had previously only signed peace treaties with Egypt and Jordan, which unlike the UAE share borders with Israel and had technically been at war with the Jewish state.

President Donald Trump’s Middle East peace plan, announced in January, forsees cooperation between Israel and those Arab countries which, like Israel, see Iran as their main foe and accuse it of fuelling regional conflicts.

The pro-Netanyahu daily Israel Hayom said on Sunday that direct talks with the UAE on the wording of the deal were close to starting and that “a full agreement could be reached within a month” with a signing at the White House.

Under the US-brokered agreement announced on August 13, Israel pledged to suspend its previous plans to annex parts of the occupied West Bank, without saying for how long.

The Palestinians have slammed the UAE’s move as a “stab in the back” while their own conflict with the Jewish state remains unresolved.

The UAE ambassador to Washington, writing in Israel’s Yediot Aharonot newspaper, argued that closer ties would benefit everybody and “help move the region beyond the ugly legacy of hostility and conflicts, towards a destiny of hope, peace and prosperity”.

The surprise announcement of the Israel-Emirati pact sparked speculation on which regional country might be next, with frequent mentions made of Bahrain and Sudan, which is turning its back on the era of ousted strongman Omar al-Bashir.

The State Department said Pompeo would meet Sudanese Prime Minister Abdalla Hamdok during his tour, to “express support for deepening the Sudan-Israel relationship”.

Saudi Arabia, in keeping with decades of policy by the majority of Arab states, has said it will not follow the UAE’s example until Israel has signed a peace deal with the Palestinians.

F-35 in the crosshairs

Following their deal, Israel and the UAE say they want to promote trade, especially the sale of Emirati oil to Israel and Israeli technology to the UAE, establish direct air links and boost tourism.

Key to that plan would be persuading Saudi Arabia to open its airspace to Israeli commercial airlines.

Netanyahu has denied reports that the agreement hinges on the sale of US F-35 stealth fighter-jets to the Emirates, saying he opposes such a move as it could reduce Israel’s strategic edge in the region.

“The Emiratis are saying there was a promise there, the Israelis are saying no,” said Joshua Teitelbaum, professor at the department of Middle Eastern studies at Bar Ilan University near Tel Aviv.

Historically, Israel, which has F-35s, has opposed the sale of advanced weaponry to other Middle East states, even Jordan and Egypt with which it has peace treaties.

But Teitelbaum said that in the past such objections had been finessed, citing the US sale to Saudi Arabia of F-15 fighters.

He told AFP he believed that “the version that the Arab country gets is not the absolute latest version. Israel is allowed to put certain modifications in the software that allow it to maintain its edge.

“The fact that Israel gave its wink to the Saudi F-15s allowed the actual price to be lowered for the Israelis.”