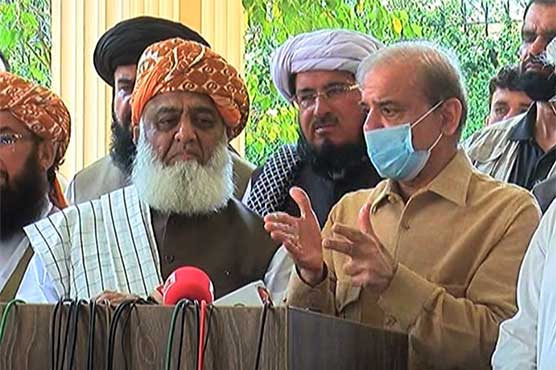 ISLAMABAD (City News) – President of Pakistan Muslim League-Nawaz (PML-N) Shehbaz Sharif on Tuesday expressed his resolve to unite all opposition parties of parliament and improve mutual consultations among them.

Shehbaz Sharif, while addressing media persons after a meeting with Maulana Fazal-ur-Rehman, said that encouraging discussions were carried out on political situation and other important issues of the country. Shehbaz Sharif also announced that All Parties Conference (APC) will soon be convened and all parties will be part of it.

Opposition Leader of National Assembly Shehbaz Sharif also lashed out government and said that there was no shortage of sugar during his tenure and on the other hand, oil prices are at lowest level in the world but petroleum prices have skyrocketed in Pakistan.

Maulana Fazal-ur-Rehman welcomed Shehbaz Sharif’s arrival at his residence and expressed desire of a joint strategy by opposition against the government. He further said that division between opposition parties is not interest of the country. Meeting of small opposition parties was postponed due to sad demise of Senator Mir Hasil Bizenjo, he added.

JUI-F Chief also reiterated that a meeting of small opposition parties and APC will be convened and reservations of all parties will be addressed.