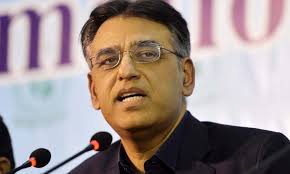 KARACHI (City News) – Federal Minister for Planning and Development Asad Umar on Saturday said that supply of drinking water, sewerage and encroachments are major problems of Karachi and government is making efforts to solve them.

Talking to media in the port city, Asad Umar said that the government is fully aware of the problems being faced by the people of Karachi. One of the main reasons for these problems is the division of power, he added.

Talking about load shedding in Karachi, Planning minister said that license of K-Electric can be amended in light of the order of Supreme Court of Pakistan. Responding to hike in power tariff, he said that NEPRA increased prices of electricity and under current system, government has no control on the regulator.

Asad Umar also criticized opposition and said visit of Opposition Leader Shehbaz Sharif to Karachi was of political nature because he, instead of sympathizing with the people of Karachi, went to meet former president Asif Ali Zardari