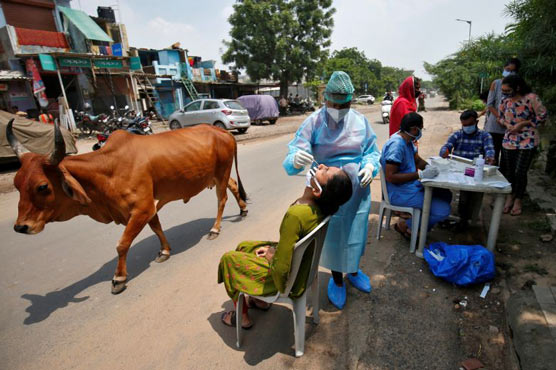 The country’s caseload has gone from three to four million in just 13 days
NEW DELHI (AFP) – India has become the world’s third country to pass four million coronavirus infections, setting a new record daily surge in cases on Saturday as the crisis shows no sign of peaking.

While the government has eased restrictions in a bid to revive the economy, India now has the world’s fastest growing number of cases at more than 80,000 a day and the highest daily death toll at more than 1,000.

The country’s caseload has gone from three to four million in just 13 days, faster than the United States and Brazil.

The pandemic is now spreading through rural areas which have poor health facilities but is also resurging in big cities like Delhi and Mumbai.

Maharashtra state, which includes Mumbai, has been at the centre of the crisis in India since a nationwide lockdown was imposed in March. It still accounts for nearly a quarter of the new daily cases across the country of 1.3 billion.

Shamika Ravi, an economics professor and former government advisor who has closely followed pandemic trends in India, said that India is “nowhere close” to a peak and Maharashtra must become the “focus” of the campaign against the coronavirus.

“There is no controlling Covid-19 in India without controlling the outbreak in Maharashtra,” she said on Twitter.

“Given its economic significance, Maharashtra will continue to influence the spread of infection elsewhere in the country.”