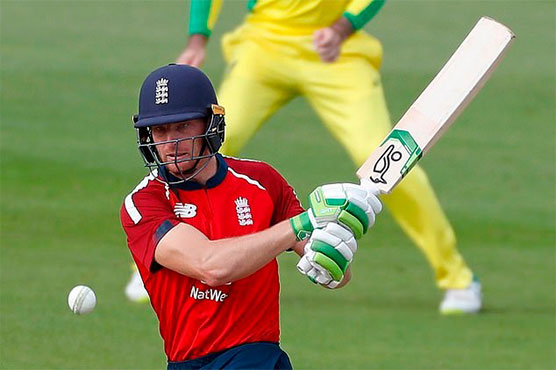 SOUTHAMPTON (AFP) – Jos Buttler said the competition for places in England s Twenty20 side had been “driving me” after his superb unbeaten 77 sealed a series-clinching win over Australia at Southampton on Sunday.

England, set a modest target of 158 after a fine performance by their attack, saw opener Buttler end the match in style with seven balls to spare when he drove leg-spinner Adam Zampa for a huge straight six.

Victory put England 2-0 up in a three-match series and they will replace Australia at the top of the T20 global standings if they complete a clean sweep on Tuesday.

This series has seen England recall several multi-format stars, including Buttler and fellow 50-over World Cup winners Jofra Archer and Mark Wood, after they had fielded separate red and white-ball squads in a season overshadowed by the coronavirus.

Tom Banton, who played on Sunday, opened during the drawn T20 campaign against Pakistan after Buttler was not selected for that series and the still injured Jason Roy missed out with a side problem.

“When you play against Australia it gives you a lot of determination to play well and I think the competition for places in the side has really been driving me as well,” said Buttler after compiling his highest T20 international score.

“When you miss out, you feel that pressure so to come back in you feel like you have to play well,” added Buttler, who faced 54 balls, including eight fours and two sixes.

While franchise star Buttler said he would be bat anywhere in England s order, he made clear his preference when asked about opening at next year s T20 World Cup in India.

“It probably is my favoured position to bat in T20 cricket. I ve had most of my success at the top and I think that is natural, if you bat in the top three in T20 cricket.”

Earlier, wicketkeeper Buttler had the best view as fast bowlers Archer, who removed dangerman David Warner for a third-ball duck, and Wood reduced Australia to 3-2 inside two overs.

“From the first over Jofra set the tone brilliantly picking up a big wicket and that really set us on our way,” said Buttler.

“As an opening batsman the last person you want to face first up is Jofra Archer with a brand new ball.

“Keeping wicket, when you watch him travel to the wicket as he did in those last two games, you know he s going to bowl fast.”

Both Archer and Wood topped the 95 mph mark on Sunday, with Buttler adding: “It s a nice thing to have as a side, those two steaming in, and I ll try to steer clear of them in the nets.”

This was just Australia s second competitive fixture after a long lay-off and fast bowler Mitchell Starc, who acknowledged the quality of Buttler s “damaging” innings, said that was more of an issue than the fact the match was played behind closed doors because of Covid-19.

“Coming off five months of no cricket probably doesn t help,” he said.

“It s not an excuse — we ve had plenty of preparation here (but) you can t really simulate international matches just by having net sessions or centre-wicket (practice games).”

Starc, however, was wary of suggestions that, with the series lost, Australia might give debuts to the likes of Riley Meredith, Josh Philippe and Daniel Sams on Tuesday.

“We re still going to be trying to win games,” he said. “It s not about handing out games.

“There s not a heap of T20 cricket before the World Cup, so you can t waste games.”