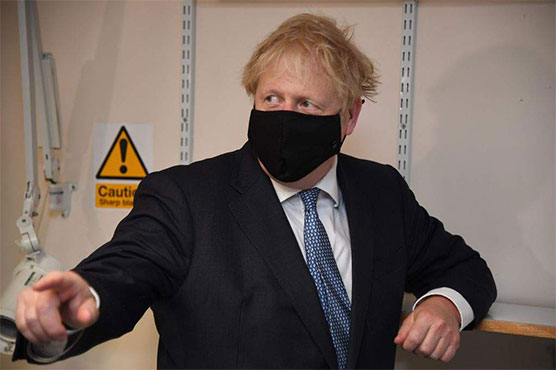 The law in England will change from next week to reduce the number of people who can gather socially from 30 to six, with some exemptions.

“We need to act now to stop the virus spreading,” the prime minister said, ahead of a press conference on Wednesday where he will explain the changes.

More than 41,500 people confirmed to have coronavirus have died in Britain, the worst toll in Europe.

The death rate has now fallen to its lowest level since mid-March, but as in other parts of Europe, cases are increasing, with almost 3,000 daily infections reported in recent days.

Johnson s office said medical and scientific advisers had agreed that “urgent action is needed”, while police had also asked for the rules to be simplified.

The government currently says people must not socialise outside in a group of more than six people from different households, but the law actually puts that limit at 30 in private spaces.

From Monday, this will be reduced to six, except for large families, weddings, funerals, organised team sports, workplaces and educational settings.

“We are simplifying and strengthening the rules on social contact — making them easier to understand and for the police to enforce,” Johnson said in remarks released by his office.

“It is absolutely critical that people now abide by these rules and remember the basics — washing your hands, covering your face, keeping space from others, and getting a test if you have symptoms.”

Earlier Tuesday, the government imposed tougher restrictions on Bolton in northwest England after a “very significant rise” in coronavirus cases.

Health Secretary Matt Hancock said contact tracing data had shown this was “partly due to socialising by people in their 20s and 30s”.

After identifying a number of pubs as hotspots, he announced curbs on hospitality venues, including reduced opening hours, and a ban on locals socialising with people outside their household.

The latest targeted local restrictions come as the government tries to get the economy moving again after months of lockdown imposed in late March.

It has encouraged people to go back to work and use a government-subsidised restaurant scheme to boost revenues for eateries hit hard by the shutdown.

Critics say such measures have only exacerbated infection rates as young people in particular head out to pubs with scant regard for social distancing.

Hancock warned that although younger people were less likely to develop serious forms of Covid-19, they could easily pass it to those more vulnerable, particularly the elderly.