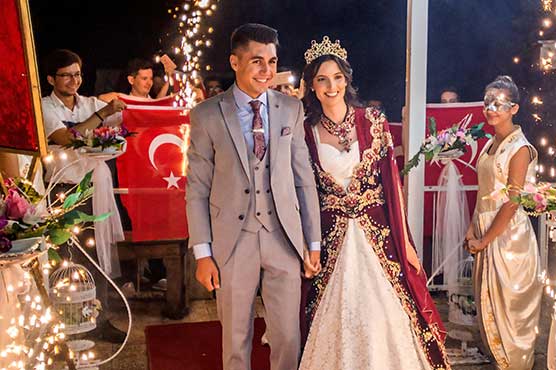 “I have a close friend who had to delay her wedding five times,” the 28-year-old said in her white bridal gown while preparing for a photo shoot on the Asian side of Istanbul.

Since premarital cohabitation is frowned upon in the mostly Muslim but secular country, lavish weddings with fancy cakes, sparkly dresses and wild parties are a huge deal, laying the foundation for a new life for millions.

But the joyous day drew the government’s wrath when videos of raucous street parties with mask-free, arm-to-arm dancing went viral just as Turkey’s infection rate began to edge back up to levels last seen in May.

In the Black Sea city of Trabzon, dozens who celebrated henna night — a wedding custom gathering the bride’s female friends and family before she leaves her mother’s home — all had to be quarantined after one of them tested positive.

The government’s hammer fell on September 4, when weddings, engagement parties and circumcision ceremonies were limited to an hour in length and banned from having dances or serving food.

Keles married the love of her life, Alp Colak, on August 21, just in time for a real wedding but still two months later and slightly smaller than planned because of uncertainties about what was being allowed.

“It was fun but we had bigger plans that didn’t come through because of the restrictions,” Colak recalled.

“Still, if it were now, even that would be a dream.”

Health Minister Fahrettin Koca says Turkey is living through “a second peak of the first wave” of the pandemic, which has officially claimed nearly 7,000 lives in the nation of 83 million people spanning Europe and Asia.

Koca specifically blamed “carelessness during religious festivals and weddings” for the rise.

But while not popular anywhere, uncertainties over weddings can be especially traumatic in places such as Turkey, where most couples live with their parents before becoming husband and wife.

“Every couple would like to have a wedding like a fairy tale. But we, the 2020 corona brides, we are all anxious,” Keles said.

Turkey has 600,000 weddings annually. Contracts for their organisation are concluded months in advance and often involve sums equal to households’ yearly incomes.

In return, gold coins, jewellery and money gifted to the couple help reduce their families’ debts.

“We are talking about a 60 billion lira sector ($8 billion) if we think an average of 100,000 lira ($13,000) is spent on each wedding,” said Emek Kirbiyik, who heads dugun.com, Turkey’s biggest wedding planning website.

He estimated that the industry will suffer a $2.6 billion loss this year, although it could be even more.

Zeynep Ece Dundar, an Istanbul wedding planner, said she has so far managed to organise 10 events this year, compared to 70 in 2019.

The government thought limiting wedding ceremonies to an hour would make them smaller and safer.

But these end up being loss-making for the companies involved, meaning they plan very few, if any at all — even if the couples want them.

“With only water (but not food) served, we cannot turn a profit,” said Hakan Kaya, who runs a leafy spot in an upscale Istanbul neighbourhood often rented for wedding parties.

“At this stage, it is more rational for us to stay closed.”

Some monster weddings are still being held — by those with connections and means.

Cemil Yaman, a lawmaker from the ruling AKP party, celebrated his son’s wedding with a 1,500-person event just a day after the ban went into effect.

“I don’t regret it. I married my son,” Yaman later told local media.

“We served dinner because we had guests who came from outside the city,” he explained. “If I don’t do this, they will gossip and say that he sent everyone home without dinner.”

President Recep Tayyip Erdogan never publically reprimanded Yaman, but did urge Turks to “give up those weddings and dinner gatherings”.

Dugun.com’s Kirbiyik agrees that curbs are needed to prevent the spread, but one sector alone should not bear all the responsibility or cost.

“I liken the current situation to a bucket with holes: they try to block one hole, which is the wedding sector, but the water keeps leaking out of the bucket,” he said.

“If measures are to be taken, they should be all over the place. Weddings should not be made the scapegoats.”