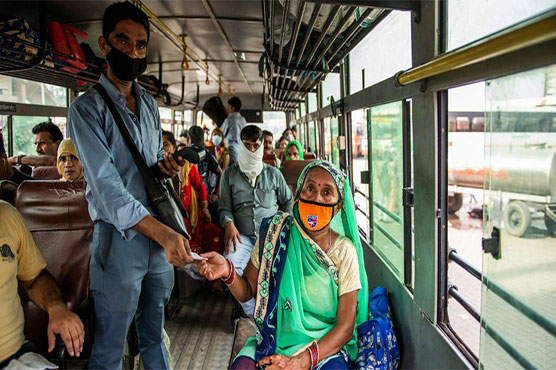 NEW DELHI (Agencies) – The number of coronavirus infections in India crossed the 5 million mark with 91,120 new cases reported on Tuesday, as infections continued to rise at an alarming rate in the nation with the worst-ever recorded case rate.

India’s tally of total cases stands at 5,018,034, behind only the United States, which at 6.76 million confirmed infections, is the worst-hit nation in the world. Also, 1,283 new deaths were reported on Tuesday, taking the nationwide death toll to 82,091. A total of 3,939,111 people who have been infected have so far recovered, according to HT’s dashboard.

At 996,832, the number of active cases in the country was a little below the million mark till late Tuesday night.

India now accounts for nearly one-sixth of all Covid-19 cases recorded worldwide since the outbreak originated in China nine months ago.

The country also has the worst-ever daily infection rate recorded anywhere in the world. The seven-day average of daily cases in India stands at 93,334, much higher than the peak in the US — where the number touched 69,373 for the week ending June 25, according to worldometers.info.

Unlike the US, India’s trajectory has shown no indication of a peak so far and has also been growing steady. The seven-day average has increased 50.7% in the last 30 days — it was 61,933 on August 17.

In terms of deaths, though, India has fared much better. The case fatality rate (CFR) — the proportion of infected people who have died from the disease — is 1.64%, which is not only better than the global average of 3.16%, but has also been improving steadily. The CFR in the US is 2.95%, and in Brazil it is 3.04%.

The rapid increase in daily cases has meant that active cases in India have been seeing a near steady increase. Active cases — which is calculated by subtracting the number of deaths and recoveries from the total caseload — is a key metric because it reflects the toll on a region’s health care facilities. In the past 30 days, active cases have increased from 672,269 to 998,757— a rise of nearly 50%.

One of the key characteristics of the outbreak in India so far has been that almost all of the country’s hot spot regions are still seeing a rising curve — daily cases in these regions continue to grow and have shown no significant drop.

Tamil Nadu (on the third spot), however, is one of the regions that appear to be experiencing a prolonged plateau — average daily cases in the state dropped marginally from 5,876 to 5,610 in 30 days.

In Delhi, average daily cases have nearly quadrupled in the same time period — from 1,033 to 4,094. At the start of August, the Capital was one of the only major regions in the country that had managed to successfully contain its outbreak when average daily cases dropped to under 1,000. Cases, however, spiked again and are now at an all-time high. To be sure, Delhi’s increase in cases has come with a record rise in daily tests.

Testing, in fact, has been one of the spheres where the country has reported massive improvements and rising daily tests have been a common factor across most regions. Average daily tests across the country have increased from nearly 780,000 to 1,100,000 in the last 30 days.

The government said on Tuesday that India has “learnt from the experience of nations” that suffered high mortalities. India was able to “distribute the curve” of coronavirus infections due to the nationwide lockdown enforced at the end of March, government officials said during the Union health ministry’s weekly Covid-19 press briefing on Tuesday.

“The US and European nations experienced a peak, then the cases dropped down and now there’s a second wave there. We took our lesson from the first wave there. We distributed the curve in a way that we did not have many deaths. It was because we had an effective lockdown, we did not have a huge peak at all,” said Indian Council of Medical Research (ICMR) director general Dr Balram Bhargava

Global recession not as deep as expected in 2020: OECD