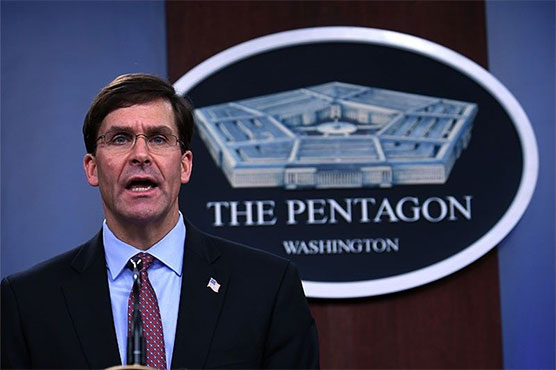 WASHINGTON (AFP) – Secretary of Defense Mark Esper announced Wednesday an ambitious plan to expand the US Navy with a range of unmanned and autonomous ships, submarines and aircraft to confront the growing maritime challenge from China.

The Pentagon chief said a sweeping review of US naval power dubbed “Future Forward” had laid out a “game-changer” plan that would expand the US sea fleet to more than 355 ships, from the current 293.

The plan, which requires adding tens of billions of dollars to the US Navy s budget between now and 2045, is aimed at maintaining superiority over Chinese naval forces, seen as the primary threat to the United States.

“The future fleet will be more balanced in its ability to deliver lethal effects from the air, from the sea, and from under the sea,” Esper said in a speech at the Rand Corp. in California.

The expansion will add “more and smaller” surface ships; more submarines; surface and subsurface vessels that are optionally manned, unmanned and autonomous; and a broad range of unmanned carrier-based aircraft.

The plan is for a fleet of ships more able to survive a high-intensity conflict, to project US power and presence, and to deliver precision strikes at very long distances, he said.

He also said trials were underway on the Sea Hunter, a 132-feet (40 meters) trimaran drone that can autonomously survey the seas for rival submarines for more than two months at a time.

“These efforts are the next step in realizing our future fleet, one in which unmanned systems perform a variety of warfighting functions, from delivering lethal fire and laying mines, to conducting resupply or surveilling the enemy,” Esper said.

“This will be a major shift in how we will conduct naval warfare in the years and decades to come.”

Esper reiterated that China is the top US security threat and that the Indo-Pacific region is the “priority theater” for the US military.

“Not only is this region important because it is a hub of global trade and commerce, it is also the epicenter of great power competition with China,” he said.

A Pentagon report on the People s Liberation Army released early this month said that Beijing has the world s largest naval fleet with 350 ships and submarines.

“Even if we stopped building new ships, it would take the PRC years to match our capability on the high seas.”

Esper said reaching the goal of 355 ships means the navy will have to grab a larger percent of the Pentagon budget, but also that the United States has to put more resources into expanding and modernizing shipyards, where China has a clear advantage.