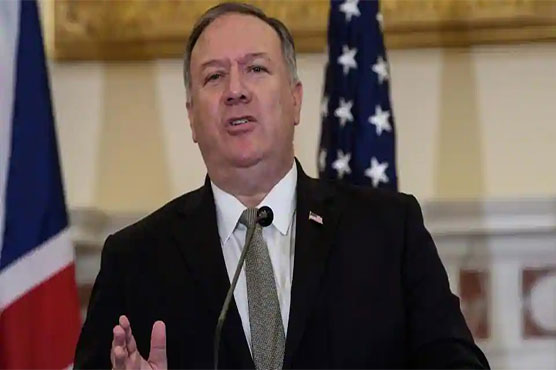 WASHINGTON (AFP) – Secretary of State Mike Pompeo insisted Wednesday the United States will enforce new “UN” sanctions on Iran starting next week, despite overwhelming consensus that Washington is out of bounds.

“The United States will do what it always does. It will do its share as part of its responsibilities to enable peace, this time in the Middle East,” Pompeo told a joint news conference with British Foreign Secretary Dominic Raab.

“We ll do all the things we need to do to make sure that those sanctions are enforced,” he said.

Pompeo last month headed to the United Nations to announce the “snapback” of sanctions under a 2015 Security Council resolution after failing to extend an embargo on conventional arms sales to Iran.

The resolution allows any participant in a nuclear accord with Iran negotiated under former president Barack Obama to reimpose sanctions, which would take effect one month afterward.

President Donald Trump pulled out of the accord, which he has repeatedly denounced, but Pompeo argues that the United States remains a “participant” as it was listed in the 2015 resolution.

The sanctions are authorized by a “valid UN Security Council resolution,” Pompeo said.

Trump has already enforced sweeping unilateral US sanctions on Iran, inflicting a heavy toll in a bid to curb the clerical state s regional influence.

The United Nations has clearly said that it cannot proceed with the reimposition of UN sanctions, with 13 of the Security Council s 15 nations objecting to the US move.

European allies of the United States say that they support extending the arms embargo but want to preserve a diplomatic solution on the nuclear issue, which they see as more important.

Playing down differences, Raab said of the nuclear accord: “We have always welcomed US and indeed any other efforts to broaden it.”

“The means by which we get there, there may be shades of difference but we have handled them… constructively,” he said.

The issue has come to a head less than two months before Trump seeks another term against Democrat Joe Biden, a supporter of the accord that curbed Iran s nuclear program.