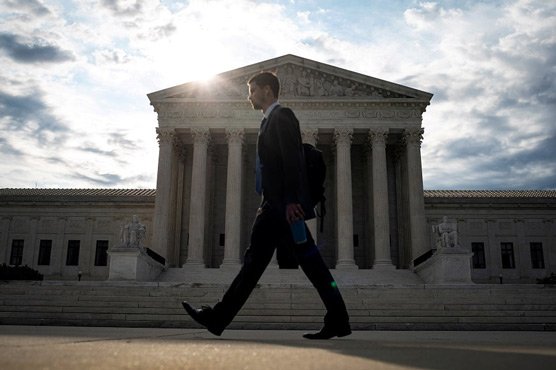 WASHINGTON (AFP) – In a cavernous building across from the US Capitol, the Supreme Court sits as the final arbiter on fundamental American legal matters, which can include minority rights, racism, the death penalty and electoral controversies.

Created under Article III of the Constitution, the court consists of a chief justice and eight associate justices — all of whom are appointed for life.

The death on Friday of Ruth Bader Ginsberg, anchor of the court’s liberal faction, could give President Donald Trump a chance to lock in a conservative majority for decades to come.

Though Democratic challenger for the White House Joe Biden has warned the president has no right to name a successor so close to the November 3 election, Senate Republican leader Mitch McConnell has vowed to hold a vote on a Trump nominee to take Ginsburg’s place.

Trump has already named two firmly conservative justices to the Supreme Court during his term: Neil Gorsuch and Brett Kavanaugh.

Justices sometimes finish their careers by resigning their post, while others serve on the court until they die.

They can retire from age 70, but rarely do so. Ginsburg, at 87, was the oldest sitting justice.

The court’s remaining liberal judges include Sonia Sotomayor, 66, and Elena Kagan, 60 — both appointed by president Barack Obama — and Stephen Breyer, 82.

Aside from Gorsuch, 53, and Kavanaugh, 55, conservatives on the bench include Chief Justice John Roberts, 65, Samuel Alito, 70, and Clarence Thomas, 72, the court’s only black member, known for virtually never speaking during oral arguments.

Like all civil servants and US presidents, Supreme Court justices can be impeached and removed from office if found guilty of treason, corruption or other high crimes, but this has yet to happen.

Since the court was established, a new appointee has been named by the president roughly every two years, and justices have served for an average of about 15 years.

Some serve much longer, however. Anthony Kennedy, who retired in 2018, was appointed in 1987 by president Ronald Reagan and confirmed the following year.

Ginsburg was appointed in 1993 by president Bill Clinton.

Any Supreme Court nominee must first survive a confirmation hearing by the US Senate Judiciary Committee, and then be approved by the full US Senate.

For a case to reach the Supreme Court, a petitioner has to challenge the constitutionality of a federal appeals court ruling, or in certain cases a state court ruling.

However, the justices get to decide which cases they will hear.

The court opens its annual session on the first Monday in October and sits until the end of June.

When the court is in session, the justices enter the courtroom at 10:00 am for public sessions. At the sound of the gavel, those present arise and remain standing until the black-robed justices are seated.

After receiving written arguments by both sides, as well as amicus curiae (“friend of the court”) testimonies from non-litigants with an interest in the outcome of the case, lawyers representing each side get just 30 minutes to argue their case, during which time the justices can ask questions.

The Supreme Court sometimes sends cases back to a lower court for re-examination and the justices can also hear urgent requests, such as an appeal to halt or postpone an impending execution.

Court rulings are approved by a majority and their opinions written up by one of the justices. The other justices can add their own comments or, if they oppose the ruling, write a dissenting opinion, something for which Ginsburg became well known.