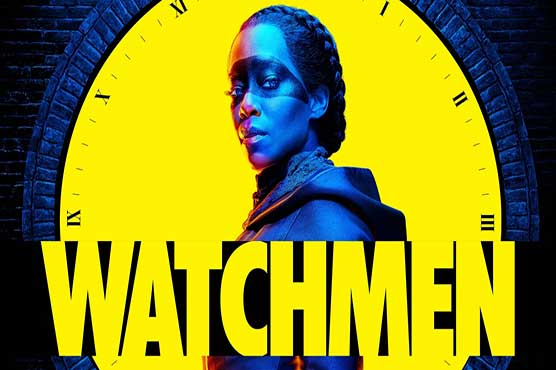 LOS ANGELES (AFP) – “Watchmen,” a dark superhero series that tackles US racism, triumphed at the Emmys on Sunday as the stars beamed in live to an empty Los Angeles theater for Hollywood’s first major Covid-era awards show.

With four victories in major categories, “Watchmen” ended up with a total of 11 Emmys — television’s equivalent of the Oscars. Its creators dedicated their win for best limited series to African-American victims of the 1921 Tulsa massacre.

“The only way to put the fires out is to fight them together,” said showrunner Damon Lindelof.

“History is mystery — it’s broken into a million puzzle pieces. We know finding them will hurt. Sometimes we caused that hurt, maybe we even benefited from it,” added Lindelof, who is white.

A timely blend of sociopathic superheroes and political satire based on a seminal 1980s graphic novel, “Watchmen” won rave reviews from critics and audiences alike.

The series, which debuted last year, depicts white supremacists, police brutality and rows over mask-wearing — all subjects of intensely polarized national debate as the United States gears up for November’s presidential election.

“Have a voting plan,” said the show’s star Regina King, a winner on Sunday.

Many viewers learned about the real-life, deadly destruction of “Black Wall Street” in Oklahoma for the first time through the HBO show’s pilot.

Its 11 wins left it two short of the all-time record of 13 held by historic mini-series “John Adams.”

Nominees and winners for the 72nd Emmys beamed in remotely from their homes and socially distanced gatherings via video call, as Los Angeles is still under tough coronavirus-related restrictions.

They were handed trophies in a variety of ways — deliverymen knocking on front doors, a “decapitated hand” emerging from a mysterious box, as winner John Oliver called it — while presenters included everyday heroes such as a medical worker, a teacher and even an astronaut.

The creator of “Succession” — a dark portrait of a Murdoch-esque family’s wrangling for control of a dynastic media empire — sounded one of several political notes by “un-thanking” world leaders for their handling of the pandemic.

“Un-thank you to President (Donald) Trump for his crummy and uncoordinated response. Un-thank you to Boris Johnson for the same thing in our country,” said British showrunner Jesse Armstrong, accepting best drama series, the night’s final prize.

The cast of offbeat Canadian series “Schitt’s Creek” gathered in Toronto as they swept the “virtual” ceremony’s comedy prizes.

“Our show at its core is about the transformational effects of love and acceptance. We need it now more than ever before,” said supporting actor winner and co-creator Daniel Levy, who also won for directing, writing and overall comedy series.

“Schitt’s Creek” — about a privileged family forced to live in a rundown motel — failed to earn a single nomination in its first four years, but it gained attention by later airing on Netflix and signed off with a heartwarming final season.

Catherine O’Hara was given the night’s first statuette for best comedy actress by a presenter in a hazmat suit. Eugene Levy, her on-screen husband, scooped best actor. Annie Murphy also won for supporting actress — the first ever comedy acting clean sweep for a series.

Racism and politics were prominent themes across the night, with actors and creators donning T-shirts bearing slogans for black victims of police violence and the Tulsa massacre.

Mark Ruffalo, who won for limited series “I Know This Much Is True,” spoke for many in famously liberal Hollywood by appearing to warn voters over Trump’s re-election bid.

Another major theme was the pandemic itself, which has turned Tinseltown upside down, bringing productions to a halt even as stay-at-home orders around the world send binge-watching through the roof.

Host Jimmy Kimmel opened the Emmys from a theater filled with cardboard cutouts of A-listers, quipping: “Hello and welcome to the pand-Emmys.”

Other nominees — who wore gowns, tuxedos, casual wear and everything in between — were sent cameras to hook up in venues of their choosing.