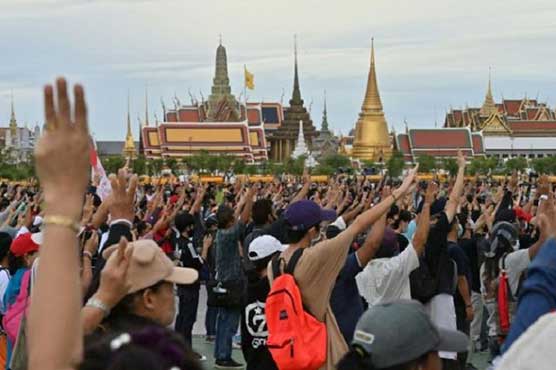 BANGKOK (AFP) – A plaque installed on the weekend by activists in Bangkok declaring Thailand “belongs to the people” had been removed Monday, after a show of force by pro-democracy protesters calling for the royal family to stay out of the country’s politics.

The kingdom has seen near-daily protests for the past two months led by students demanding the resignation of Prime Minister Prayut Chan-O-Cha, a former army chief who masterminded the 2014 coup.

Some 30,000 demonstrators rallied Saturday close to Bangkok’s Grand Palace — where organisers took a stronger line on monarchical reform — before installing a commemorative “People’s Plaque” the morning after.

But by Monday, the plaque had vanished.

The almost-immediate removal of the plaque “reflects the fact that arch-royalists are not only incensed by demands for monarchical reform but are not going to put up with any symbols that even reflect opposition to the palace,” said Paul Chambers of Naresuan University.

The plaque, placed in the historic Sanam Luang field, had read: “The people have expressed the intention that this country belongs to the people, and not the king.”

At its installation during Saturday’s protest, prominent activist Parit Chiwarak shouted “Down with feudalism, long live the people,” as the crowd cheered.

The new medallion referenced the original brass one embedded for decades in the grounds of Bangkok’s Royal Plaza.

It commemorated the end of royal absolutism in 1932 after a revolution that transitioned the kingdom into a constitutional monarchy.

But it mysteriously disappeared in 2017 — after King Maha Vajiralongkorn took power following the death of his father — replaced with one bearing a reminder for Thais to remain loyal to the “nation, religion, king”.

The largely leaderless youth-organised movement, partly inspired by Hong Kong’s pro-democracy protests, is calling for Prayut’s government to be dissolved, a rewrite of the 2017 military-scripted constitution, and for authorities to stop “harassing” political opponents.

Some factions within the movement — including the organisers of the weekend demonstrations — have also called for frank discussions on the monarchy, a once-taboo topic due to tough royal defamation laws.