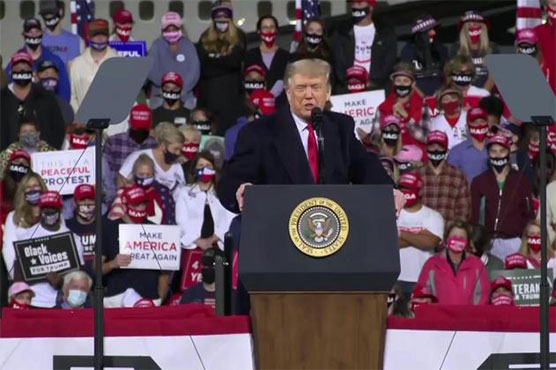 WASHINGTON (AFP) – The race for the White House heated up Sunday with both sides galvanized by the battle to nominate a new Supreme Court justice and Donald Trump vowing to soon name his choice.

The president said Saturday that he expected to announce his nominee in the coming week and that it “will be a woman — a very talented, very brilliant woman.”

He said he had not made his final decision, however, on a replacement for liberal Justice Ruth Bader Ginsburg, who died Friday at 87.

The prospect of a Senate confirmation vote on a Trump nominee before the November 3 election has sparked furious pushback from Democrats desperate to stop Trump moving the court lastingly to the right.

But with two Republican senators — Lisa Murkowski of Alaska and Susan Collins of Maine — now opposing a rushed vote, the Senate may be more likely to act in the lame-duck session immediately following the election.

Either way, politicians in both parties are bracing for a seismic battle in a year that has already seen an impeachment vote, the Covid-19 pandemic and a bruising economic collapse.

Trump s opponent in the election, former vice president Joe Biden, has joined other Democrats in saying the choice of Ginsburg s replacement to a lifetime appointment should be left to the next president.

With Republicans holding 53 of the 100 Senate seats, Democrats still face an uphill battle.

– Arrows in our quiver –

Among the Democrats few options: delaying tactics in the Senate and efforts to mobilize public pressure on more moderate Republicans to split with their party.

“We have our options… arrows in our quiver,” House speaker Nancy Pelosi, a senior Democrat, said Sunday on ABC s “This Week.”

But she rejected the notion of using talks with the Trump administration over a new pandemic relief bill as leverage to slow matters, saying, “None of us has any interest in shutting down government.”

The court vacancy has provided a welcome new theme for Trump — who has struggled to play down the toll of the coronavirus pandemic, now nearing the grim total of 200,000 deaths.

Pelosi seemed intent on keeping the virus issue front and center, returning to that theme repeatedly during her ABC interview.

Democrats are decrying what they say is the hypocrisy of Republicans — particularly Senate leader Mitch McConnell — who in 2016 blocked Barack Obama s attempt, much earlier in that election year, to fill another Supreme Court vacancy.

But Republicans are now insisting that the situation this year is different, with the same party controlling both Senate and White House.

“The right thing is for the Senate to confirm before Election Day,” Republican Senator Ted Cruz told ABC.

Both parties see the balance of the court — as it rules on vexed issues including abortion, healthcare, gun control and LGBTQ rights — as of utmost importance.

If confirmed quickly enough, a new conservative justice would be part of a 6-3 majority, and could play a crucial role — in their first months on the court — if the November election face legal challenges.

Cruz, who was on a Trump list of potential court nominees, insisted Sunday that a full court was needed to avoid a critical deadlock should a battle over the election outcome reach the Supreme Court.

“An equally divided 4-4 court can t decide anything,” Cruz said. “We need a full court on Election Day.”

Of the score of names on a tentative list released earlier by Trump, Barrett — a fervently anti-abortion Catholic — is considered among the most conservative.

Analysts said Lagoa, as a Cuban-American, could help Trump win votes in the key state of Florida.

Analysts speculated that Trump would be guided by McConnell in deciding the best time for a confirmation vote.

The Kentucky senator might be wary of forcing Republican senators facing tough re-election battles to cast a ballot before the election.

No date has been set for Ginsburg s funeral or a public memorial service, sure to be a major national event.

Mourners gathered at the Supreme Court in Washington all through the weekend to pay solemn tribute.

“Ruth, I didn t know you, but you affected my life in many ways,” says one letter placed at the foot of the court building, among flowers and rainbow flags.