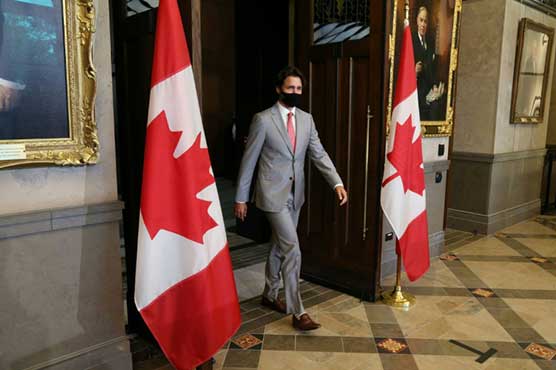 OTTAWA (AFP) – Prime Minister Justin Trudeau will lay out on Wednesday a new post-pandemic direction for Canada that will test his minority government’s support in parliament in the coming weeks.

Trudeau had hinted his so-called throne speech would herald grand New Deal-style reforms, with a focus on implementing climate measures and addressing social inequalities laid bare by the Covid-19 outbreak.

But those plans have been tempered by an uptick in new coronavirus cases as millions of Canadians have returned to work and school this month, with the focus of the speech instead set to remain on emergency measures to limit the contagion’s spread.

Trudeau had vowed “bold new solutions” to Canada’s ills, saying in August: “As much as this pandemic is an unexpected challenge, it is also an unprecedented opportunity.

“This is our chance to build a more resilient Canada, a Canada that is healthier and safer, greener and more competitive… more welcoming and more fair.”

But one month later, amid warnings of a second Covid-19 wave, his tone turned apprehensive.

“We’re not out of the woods,” Trudeau said last week. “The fight against Covid-19 is far from over, so we must stay focused on the task ahead.”

Meanwhile, new finance minister Chrystia Freeland is also fretting about whether Ottawa has the fiscal capacity left to pay for major reforms anyway, after the country doled out more than Can$300 billion (US$230 billion) in emergency aid in the last six months.

One year since elections

It has only been one year since the Liberals were re-elected, when they lost their majority in the lower chamber of the legislature last October.

Trudeau insists he needs the “approval of parliament in order to be able to move forward” on his policy goals, as Canada’s circumstances are dramatically different than when he won his mandate last year.

Thanks to the pandemic, the country’s jobless rate peaked at 13.9 percent in May, while the economy contracted at a record 38.7 percent in the second quarter.

It is arguably an awkward time for sweeping policy changes, or as critics suggested, to dare the opposition to force snap elections.

But polling shows most Canadians are satisfied with Trudeau’s management of the crisis.

And the Tories elected a new leader only last month: Erin O’Toole, who is not well known to Canadians.

Both O’Toole and Bloc Quebecois leader Yves-Francois Blanchet are isolating after testing positive for Covid-19 and so will not attend the speech.

Plus, officials have yet to sort out a plan for virtual voting to avoid cramming 338 members into the House of Commons to cast ballots on the throne speech and a new budget.

All three opposition parties would need to work together to topple the government. Few believe they will take the bait.

“If there is an election coming, we’re all apparently missing the war drums because they’ve all gone down to a dull thump,” said Tim Powers, managing director of polling firm Abacus Data.

“I think the public mood at the moment is: Fix some problems but don’t try to re-make society because we’re still in the midst of a pandemic,” he told AFP.

“Canadians want a government that’s ready to continue to lay their hands on them and protect them and help them. I think all political parties have an awareness of that.”

University of Ottawa professor Genevieve Tellier suggested the Liberals could parlay the unease into support for their new agenda.

Trudeau’s father, former prime minister Pierre Trudeau, ushered in major new social changes while himself at the head of a minority government.

An election now, she added, would favor the incumbent.

“You can’t have big rallies right now, where candidates gain visibility. Even wearing a mask means that people don’t recognize you and don’t see your face,” she explained.

The situation might also allow the prime minister to move past a third ethics scandal in as many years — the latest involving a now-defunct charity with Trudeau family ties tapped by Ottawa to distribute pandemic aid.

But “if there has to be an election, we’ll figure it out,” he added.

Regardless, Tellier said the throne speech was highly anticipated, because “Canadians want reassurance that the government has a plan.”