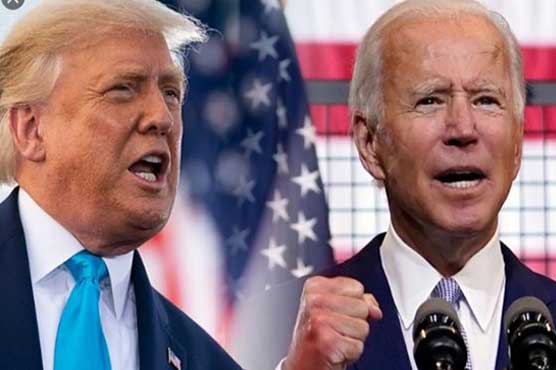 WASHINGTON (AFP) – Donald Trump always fancied himself streetwise, a real tough guy, and at the first presidential debate with Joe Biden next week he’ll be wearing the verbal brass knuckles.

Trump, 74, is not a leader comfortable with the soaring rhetoric of JFK or Ronald Reagan. He’s not one for the nuanced elegance that fans loved — and detractors saw as aloofness — in the speeches of Barack Obama.

This is a president who brought reality TV skills to the White House. He’s an entertainer whose style is inspired by the gaudy chaos of professional wrestling.

And he’s a New Yorker who mimics the wise-guy argot of mafia movies and loves to hang out with boxers and MMA athletes.

So don’t expect subtlety at his first-of-three socially distanced clashes with Biden on Tuesday in Cleveland.

Trump was not entirely joking.

Take it from Hillary Clinton, the last person he pummeled in the presidential debate ring.

“He could have cared less about answering the questions or even giving accurate information,” she recalled in The Atlantic about their 2016 encounters. “He came prepared to insult, to bully.”

Opinion polls scored the intellectual Clinton as winner of the three debates. But real momentum — and eventually the election — went to the hard-hitting newcomer from New York.

Now Trump is behind and hoping his debate prowess will help him catch Biden in time for November 3.

His fans muse that he may deliver a knock-out blow. Certainly Trump is confident: he pushed, unsuccessfully, for a fourth debate.

By contrast, some Democrats have begged Biden not to debate at all, fearing that no one can prepare for Trump’s unstoppable exaggerations and lies.

Trump is “unique,” said Aaron Kall, director of debate at the University of Michigan and co-author of “Debating The Donald.”

“There is no playbook on how to debate him.”

Fox News host Chris Wallace, the moderator of the first debate, outlined the main topics they’ll cover, including the Covid-19 pandemic, the economy and racial tensions.

Wallace is a skilled questioner. Trump, though, is equally handy at ignoring constraints.

Continuing with his pugilistic metaphors, Trump says he’s ready to “take the gloves off.”

For months he has been insulting Biden as everything from a closet communist to practically brain dead. What more he can do is unclear.

But he’ll do something.

At one of the debates with Clinton, Trump pulled an unheard of stunt by inviting several women who had accused her husband, former president Bill Clinton, of sexual impropriety.

In another unsettling trick, he wandered from his designated spot to loom menacingly behind Clinton.

“No matter where I walked, he followed me closely, staring at me, making faces,” Clinton wrote in her book “What Happened.”

“It was incredibly uncomfortable. He was literally breathing down my neck. My skin crawled.”

Against Biden, Trump is likely to push hard on accusations that the former vice president’s son Hunter was involved in corrupt business deals in Ukraine and China.

If that doesn’t rile up Biden, who would bet against Trump daring to ask his opponent whether he took performance-enhancing drugs? Trump and his aides have repeatedly called Biden senile, claiming he uses something to improve mental acuity during debates.

“I think he should take a drug test,” Trump said on Fox News.

Biden acknowledges that keeping his cool will be essential.

“I hope I don’t get baited into a brawl with this guy, because that’s the only place he’s comfortable,” Biden told supporters.

Trump has spent so long tearing Biden down that even a moderately smooth performance by his opponent could end up being portrayed a triumph.

Cue the president on the eve of the debate trying to shift expectations by insisting career politician Biden actually has the advantage.

Trump being Trump, he doesn’t want to spend too long extolling an opponent — even if there are sound tactical reasons to do so.

No sooner does he promote the idea of Biden as a fearsome debater than he quickly reverts to old insults.

It’s as if the street fighter can’t stand the idea of a man he considers weaker ever coming out on top.

“I will have lost to the worst presidential candidate in the history of politics,” Trump lamented to a crowd of supporters this week.