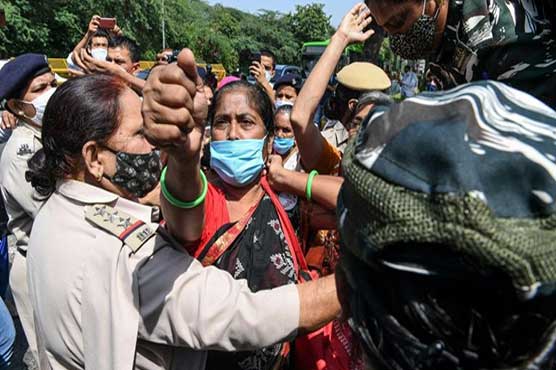 BOOL GARHI (AFP) – Indian police were accused Wednesday of cremating the body of a teenaged “untouchable” Dalit woman against her family’s wishes after she died following an alleged gang-rape by four upper-caste men — the latest sexual assault to shock the country.

The 19-year-old from India’s marginalised Dalit community was left paralysed following a brutal attack two weeks ago in fields outside a village in the northern state of Uttar Pradesh.

She was found lying in a pool of blood after going missing while collect fodder outside her home village of Bool Gahri.

The woman, who cannot be named for legal reasons, was later taken to hospital in New Delhi, around 200 kilometres (120 miles) away, but died Tuesday from her injuries.

The assault comes months after four men were hanged for the brutal 2012 gang rape and murder of a student on a bus in Delhi, a case that came to symbolise the nation’s problems with sexual violence.

The latest attack sparked anger that was further fuelled Wednesday after the woman’s family accused police of cremating her body in the dead of night — against their wishes and religious custom — raising doubts about their commitment to a proper investigation.

“I wasn’t even allowed to see the body of my daughter one final time before they burned it,” her mother told reporters Wednesday.

Four men have been arrested in connection with the attack — all aged in their 20s and 30s — with an Indian newspaper reporting one was from a wealthy landowning family feared by the community.

He “creates trouble but no one ever says anything,” the Indian Express quoted a villager as saying.

“He drinks, harasses women. Everyone is scared of the family.”

Police chief Vikrant Vir insisted the woman’s cremation took place with the family’s consent, but added: “We did not want any outsider to create law and order disturbances.”

India’s 200 million “untouchable” Dalits have long faced discrimination and abuse, and campaigners say attacks on them have increased during the coronavirus pandemic.

The attack has sparked uproar and lit up social media in India, with politicians, Bollywood personalities, cricket stars and rights activists voicing anger.

“When will this stop? Our laws & their enforcement must be so strict that the mere thought of punishment makes rapists shudder with fear! Hang the culprits,” tweeted Bollywood megastar Akshay Kumar.

Nearly 90 rape cases were recorded every day last year, according to data released Tuesday by the National Crime Records Bureau, but vastly more assaults are thought to go unreported.

“We are getting reports of rape cases non-stop, this isn’t the first one,” protester Jaideep told AFP.

“In this one there was so much pressure from the upper castes that the police didn’t register a case for eight days.”

In Bool Gahri Wednesday, there was a heavy police presence with barricades and police at every corner as dozens of TV crews scrambled to interview relatives and locals.