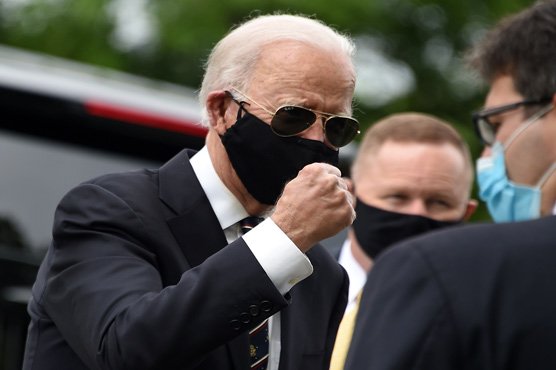 Biden, once mocked by Trump, now the only man on campaign trail

But with the president in quarantine from Friday after testing positive for Covid-19, his Trump train derailed for now, Democratic challenger Biden has the stage to himself one month before Election Day.

It is too soon to predict how Trump’s diagnosis could impact the White House race, already the most turbulent US presidential battle of modern times and one repeatedly upended by history-making events.

But the irony of the latest twist in the septuagenarian showdown was lost on no one.

After all, just Tuesday night Trump doubled down on his ribbing of Biden for taking too many virus precautions.

“He could be speaking 200 feet away from you, and he shows up with the biggest mask I’ve seen,” the 74-year-old Republican incumbent sneered.

In the early months of the pandemic, as Biden, 77, remained isolated in his Delaware home, Trump belittled “Sleepy Joe” for “hiding” in his basement — a charge his supporters lapped up and repeated ad infinitum.

But on Friday, Trump was the one hunkered down, receiving treatment at the Walter Reed military hospital after his positive diagnosis.

Biden mostly has been meticulous about avoiding crowds and wearing masks in public.

But he was on stage with the president during their off-the-rails debate, three nights before Trump’s diangnosis.

Biden and his wife were quickly tested for the virus Friday. Minutes after their results came back negative, his team fired up the campaign jet and Biden flew to battleground Michigan, a key Rust Belt state that Trump claimed in 2016.

The somber appearance at a labor union in Grand Rapids had only a few dozen people present and no visible personal interaction with voters.

But the message was clear: Biden is not letting Trump’s diagnosis upend his own campaigning, which has ramped up recently including Wednesday’s whistlestop train tour across Ohio and Pennsylvania.

Michigan voters who lined the road outside Biden’s event offered their own take on recent developments, with one woman holding a small sign reading “Masks work.”

Biden’s speech, which he delivered wearing a face mask, focused on the economy but also touched on the day’s bombshell headline.

“It’s a bracing reminder to all of us that we have to take this virus seriously. It’s not going away automatically,” he said, perhaps a jab at Trump’s repeated insistence that the virus will simply “disappear.”

“But this can not be a partisan moment,” Biden stressed. “It must be an American moment (when) we come together as a nation.”

“Be patriotic,” he said. “It’s not about being a tough guy, it’s about doing your part.”

Biden nevertheless refrained from direct criticism of his opponent, and ended his speech with warm wishes for his adversary.

“May God protect the first family and every family that is dealing with this virus,” Biden said.

His campaign team said it was pulling all negative ads against Trump scheduled to air Friday.

Some pro-Biden voices wondered whether he should pull his punches when the president — who disparages Biden, attacks the integrity of mail-in ballots and trails in the polls — is on the ropes.

“Crush Trumpism, beat him. Put your ads back up. This is a fighting hour,” Steve Schmidt, an anti-Trump former Republican strategist, tweeted Friday.

“Magnanimity and grace in victory. For now total political war.”

Others recalled how Trump, at a rally four years ago, openly mocked Democratic nominee Hillary Clinton after she was treated for pneumonia during their 2016 race.

Biden only boosted his travel schedule in late August, after months of virtual events or in-person appearances not far from Wilmington.

During that time, Trump criss-crossed the nation, holding rallies sometimes with thousands of attendees. These were held mainly outside, but few attendees wore masks.

With only 32 days to go before Election Day, Trump’s campaign team announced that his events would either be virtual or postponed until further notice.

And Biden’s running mate, Senator Kamala Harris, was in Nevada Friday. The 55-year-old tested negative Friday — as did Vice President Mike Pence, whom she is set to debate on October 7.

Registration of madrassas to begin from Oct 5