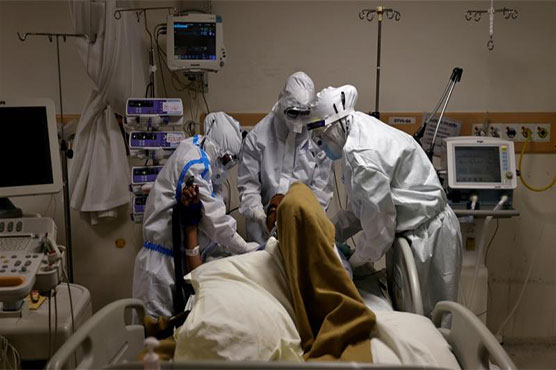 NEW DELHI (Agencies) – The death toll from the coronavirus disease (Covid-19) in India surpassed the 100,000 mark on Friday, a grim milestone that comes exactly seven months from the day the first batch of cases were reported in the country.

India became the third country in the world to cross this landmark – only the United States (212,000 deaths) and Brazil (144,000 dead) have reported more fatalities – but does so with a significantly better mortality rate than nearly all other countries that have seen large outbreaks. India’s case fatality rate (CFR) – the proportion of death to the number of confirmed cases – stands at 1.56%, which is not only half of the global average (2.98%), but also better than the comparable rates in the US (2.84%) and Brazil (2.99%).

However, since the first week of September, daily deaths in India have been outstripping those in any country in the world. On average, 1,065 people have died every day over the past week in the country, against 755 average daily deaths in the US and 713 in Brazil in the same period.

This has made India the biggest contributor to the global death tally — one in every five fatalities (19%) in the world in the past week has come from India. The first death due to Covid-19 was reported on March 12 in Karnataka, with the 100,000th fatality coming 204 days later. If India’s fatalities are divided into four phases of 25,000 deaths each, each has become shorter than the one preceding one. While the first 25,000 deaths took 127 days (on July 16), India crossed the 50,000 mark only 30 days later (on August 15). Deaths crossed the 75,000 mark another 25 days later on September 9, with the latest 25,000 fatalities coming in just 23 days.

The seven-day average of fatalities in India has been over the 1,000-mark for the past 28 days, according to HT’s Covid-19 dashboard. At its peak (so far), this number touched 1,166 for the week ending September 19. To be sure, this has dropped slightly over the past few days and is 1,069 as on Friday. Only the US, where the trajectory touched 2,300 deaths a day for the week ending April 21, has seen more people die this consistently.

As of Friday night, of the 6.47 million people infected in the country, 100,896 have lost their lives and over 5.42 million have recovered. The death toll is, however, expected to keep rising as the country is still adding 81,431 new cases a day on average, and of those around 1.5% (based on India’s CFR) will succumb to the disease.

Government experts have credited India’s relatively better Covid-19 mortality rate to a series of factors such as the experience in dealing with other lung diseases such as tuberculosis, and early interventions in terms of the nationwide lockdown. “These things were crucial in identifying the infected, and isolating them as per requirement very early on in the disease stage,” said Dr Samiran Panda, head, epidemiology and communicable diseases, India Council of Medical Research (ICMR).

Independent experts said the country’s relatively younger population may have also helped in reducing mortality. “Fewer people dying in India of Covid is not surprising as the severity of infection is low in the country, which among other factors can be attributed to better immunity status to fight any infections, and also relatively younger population with fewer comorbidities,” said Dr NK Mehra, former head, transplant, immunology and immunogenetics, All India Institute of Medical Sciences, Delhi.

The fact that the outbreak in India started relatively later than it did in the western world may have also worked to India’s advantage on the CFR front. This becomes particularly evident because as the disease has progressed, scientists and doctors have learnt to fight and treat it better. As the result, the CFR has been improving, both in India and the rest of the world. India’s CFR has halved since the start of July – it was 3% on July 1.

“We obviously know the disease far better now, and manage to save most of the hospitalised patients. The mortality rate is under 2%, which is decent if you compare with other countries,” said Dr GC Khilnani, former head, department of pulmonology, All India Institute of Medical Sciences, Delhi.

The share of deaths among the states, however, has largely been uneven, with Maharashtra (37,480 deaths till Friday) accounting for 37% of all fatalities in the country. It is followed by Tamil Nadu with 9,653 deaths and Karnataka with 9,119 people killed.