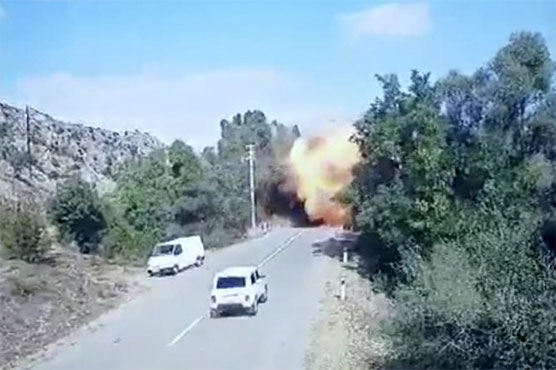 STEPANAKERT (AFP) – Armenia accused Azerbaijani forces of shelling the main city in the disputed Nagorno-Karabakh region on Friday as heavy fighting raged for a sixth day.

After intermittent shelling during the day, Stepanakert, the main city in Karabakh, came under heavy bombardment in the evening with local residents hiding in shelters and some fleeing the city, an AFP team reported.

A separatist official, Grigory Martyrosyan, told journalists that “public buildings, houses and infrastructure were damaged” but the city would not be evacuated.

Baku and Yerevan have for decades been locked in a simmering conflict over the ethnic Armenian province that broke away from Azerbaijan in a bitterly fought war in the 1990s.

New fighting that erupted on Sunday has been the heaviest in decades and has claimed nearly 200 lives, including more than 30 civilians.

Yerevan said it was ready to work with mediators for a ceasefire but Azerbaijan insisted that Armenia must first withdraw its troops.

French President Emmanuel Macron has accused NATO member Turkey — which backs Azerbaijan — of sending in “jihadist” militants from Syria, which both Ankara and Baku deny.

A British-based monitor, the Syrian Observatory for Human Rights, reported at least 28 Syrian rebel fighters had been killed in clashes, claiming there were more than 850 such combatants.

International calls for the neighbours to halt clashes and begin talks have intensified as fears grow that the fighting could expand into a multi-front war sucking in regional powers Turkey and Russia.

UN Secretary-General Antonio Guterres urged both sides to “immediately end all hostilities” stressing that there was no “military solution to the conflict,” his office said.

Armenia said Azerbaijani forces had wounded “many” people in Stepanakert but some locals said they were not afraid.

Armen Muradyan, a former health minister volunteering as a doctor, said shrapnel wounds were widespread among civilians, “showing indiscriminate use of military force.”

The separatist government said Azerbaijani forces had destroyed a bridge linking Armenia to Karabakh and vowed a counterstrike.

“There will be a proportionate response,” said Vagram Pogosyan, a spokesman for the separatist leader.

Azerbaijan in turn accused Armenian forces of shelling its territory, including the town of Terter.

“On Friday, more than 2,000 artillery shells were fired” at Terter, said Hikmet Hajiyev, an advisor to President Ilham Aliyev.

Civilians were “caught in the crossfire” of the violence, the International Committee of the Red Cross said, adding hundreds of homes as well as schools and hospitals had been destroyed.

Yet residents on both sides said they were getting used to the sounds of war and spoke out against negotiations.

Arkady in Stepanakert, said he did not want talks with Azerbaijan that he described as “nonsense,” insisting the enemy should be crushed.

In Azerbaijan, too, some expressed little appetite for talks.

“We are not afraid. We do not have a lot of wounded,” Anvar Aliyev, a 55-year-old taxi driver, told AFP in the Fizulinsky district.

“We have to return to our lands.”

Yerevan expressed its readiness to work with international mediators to halt the fighting.

Armenia “stands ready to engage” with France, Russia, and the United states “to re-establish a ceasefire regime,” the foreign ministry in Yerevan said.

But it said that talks could not begin unless clashes are halted.

Azerbaijan said that Armenia must first withdraw its troops, accusing it of “fresh attempted aggression”.

France s Macron on Friday spoke to the Armenian Prime Minister Nikol Pashinyan and Azerbaijan s President Aliyev and reiterated his call for a ceasefire, the Elysee said.

Yerevan, which is part of a Moscow-led military alliance of ex-Soviet countries, has accused Azerbaijan of using “cluster munitions” prohibited by international law.

This came after a rocket strike on Karabakh on Thursday injured four journalists, including two from the French daily Le Monde who were evacuated after undergoing surgery.

In a joint appeal Thursday, Putin, US President Donald Trump and Macron urged the two sides to return to negotiations aimed at resolving their longstanding territorial dispute.

Armenia has recorded 158 military deaths and 13 civilian casualties since Sunday. Azerbaijan has not reported any military deaths but said 19 civilians were killed after Armenian shelling.

Karabakh s declaration of independence from Azerbaijan sparked a war in the early 1990s that claimed 30,000 lives, but it is still not recognised as independent by any country, including Armenia.

pompeo urges third parties to stay out of Karabakh conflict