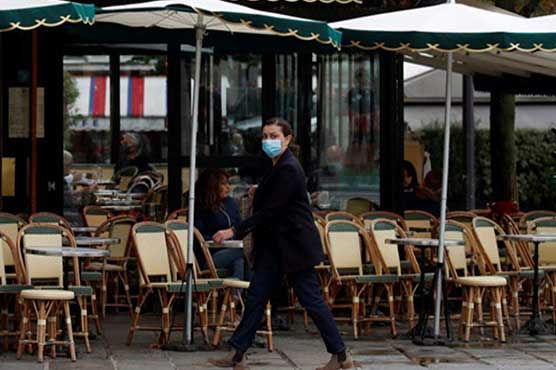 PARIS (AFP) – A second wave of the coronavirus in Europe has forced Paris to shutter its iconic cafes Monday as the US presidential race was in disarray after Donald Trump checked himself out of hospital after Covid-19 treatment.

Tuesday’s shuttering of bars and cafes — seen by many as the essence of Parisian life — were “braking measures because the epidemic is moving too fast,” Paris police chief Didier Lallemant told journalists, adding that restaurants will remain open provided they respect new safety measures.

These will include providing sanitising hand gel, limiting patrons to six a table with at least a meter (about a yard) between seats, and allowing diners to remove their masks only for eating.

“It’s not going to work for small restaurants,” said the owner of a tiny Paris eatery that also operates as a cafe and a bar — depending on the time of day — as well as a tobacconist.

“Everybody is going have to crunch numbers: Is it worth staying open or not?” the owner, who gave his name only as Michel, told AFP.

Trump, on the other hand, seemed unfazed by the virus when he checked out of hospital after four days of emergency treatment for Covid-19, pulling off his mask the moment he reached the White House.

Before he left the Walter Reed military hospital, he tweeted that he would “be back on the Campaign Trail soon!!!”

He also told his supporters, “Don’t be afraid of Covid,” claiming to be feeling rejuvenated after his illness.

With the Republican’s tough election campaign in its final month, he and his advisors have sought to project a sense of continuity.

But the coronavirus has continued to ravage the US: New York governor Andrew Cuomo announced Monday that schools would temporarily close in nine neighborhoods experiencing an uptick in Covid-19 infections.

Meanwhile, two prominent Europeans announced Monday they were going into self-quarantine after coming into contact with individuals who have tested positive for the virus.

Ursula von der Leyen, the 62-year-old head of the European Commission, said she would self-isolate for a day.

Lithuanian Foreign Minister Linas Linkevicius, 59, also started a week of self-isolation after meeting with a Covid-positive French embassy staffer during a visit by President Emmanuel Macron.

Europe, which has recorded 235,553 deaths, is approaching a caseload of six million out of the more than 35.2 million cases officially diagnosed across the world.

That figure, the World Health Organization said Monday, is a fraction of the likely actual count, which the UN health body estimated at one in 10 of the world’s 7.8 billion people.

“Our current best estimate tells us that about 10 percent of the global population may have been infected by this virus,” WHO emergencies director Michael Ryan said.

The virus has killed at least 1,037,971 people worldwide according to the latest AFP tally based on official sources.

Neighbouring Ireland for its part is mulling a nationwide lockdown after a surge of new cases.

The National Public Health Emergency Team recommended that the entire country reprise the highest level of Covid-19 restrictions imposed during the original lockdown in March.

Russia recorded 10,888 new cases on Sunday — close to a peak reached in May — but stopped short of reimposing a new lockdown.

Spain has decided partial lockdowns for two more cities, Leon and Palencia, after residents of Madrid and nine nearby towns were barred from leaving city limits for any reason other than work, school or medical and legal appointments.

While Madrid’s regional authorities have criticised the two weeks of restrictions as too stringent, healthcare experts have said they do not go far enough.

Europeans despondent over returning to restrictions they had thought were behind them can look to New Zealand’s triumph over a second wave in the Pacific island nation.

Prime Minister Jacinda Ardern declared that her country had “beat the virus again” and announced that restrictions in the largest city Auckland would be eased after a second Covid-19 wave was contained.

“Aucklanders and New Zealanders stuck to the plan that has worked twice now, and beat the virus again,” Ardern said.

While the ravages of Covid-19 on the physical and economic life of the planet are clear, the pandemic’s devastating effects on mental health have been widely overlooked, the WHO said Monday.

A survey conducted between June and August revealed severe disruptions to mental health services in 93 countries, the WHO said ahead of a large fundraising push.

“This is a forgotten aspect of Covid-19,” WHO mental health director Devora Kestel told a virtual media briefing.