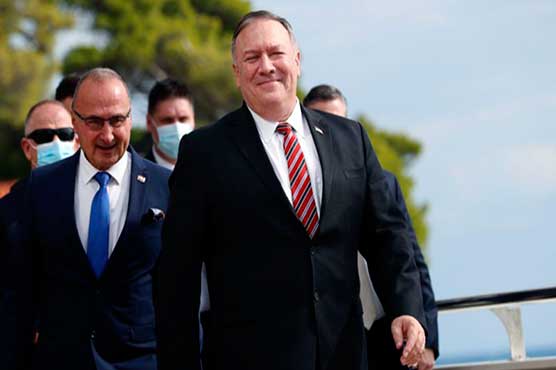 TOKYO (AFP) – US Secretary of State Mike Pompeo held talks on Tuesday with key Asia-Pacific allies in Tokyo, presenting a united front on the regional challenge posed by China.

The top US diplomat is meeting his Japanese, Australian and Indian counterparts on a trip that was scaled back following the coronavirus crisis in Washington, where President Donald Trump and a raft of staff and advisors have contracted Covid-19.

Stops in South Korea and Mongolia have been scrapped, but Pompeo said the meeting of the so-called Quad had taken time to put together and was expected to produce “some significant announcements”.

Pompeo is the first senior US official to visit Japan since Prime Minister Yoshihide Suga took office last month, and he said he was confident Tokyo and Washington were on the same page.

“In his first statement after assuming office, Prime Minister Suga described the free and open Indo-Pacific as ‘the foundation of regional peace and stability’. I could not agree more,” Pompeo said at the start of talks with Japan’s Foreign Minister Toshimitsu Motegi.

“I would only add, the foundation’s cornerstone is the US-Japan relationship and the security and prosperity it has provided for our peoples,” Pompeo said.

Pompeo is a vociferous critic of China on issues from security to human rights to the coronavirus pandemic, which Trump’s administration has sought to blame squarely on Beijing ahead of the US election on November 3.

Pompeo has led an international campaign for other nations to shun China, including its technology.

Despite Pompeo’s promise of “significant announcements”, no joint statement or press conference is expected after the talks, which appeared more symbolic than immediately substantive.

The Quad grouping was heavily promoted by Japan’s former prime minister Shinzo Abe as a way for the region’s major democracies to step up cooperation in the face of military and other threats posed by China.

Suga faces a delicate balancing act, seeking on one hand to continue Tokyo’s gradual improvement of ties with Beijing, while also backing allies Washington, New Delhi and Sydney — all currently locked in rows with China.

He told reporters on Monday he would seek to “promote a free and open Indo-Pacific” but also “build stable relations with neighbouring countries including China and Russia”.

A Japanese diplomat, briefing media ahead of the meetings, said the ministers would discuss issues including virus measures, as well as maritime and cyber security.

The shared values of the alliance have “gained increasing significance in the post-coronavirus world”, the diplomat said.

“At this foreign ministers’ meeting, we expect the participants to confirm their enhanced coordination to realise that vision and to further broaden coordination with more countries.”

The first Quad meeting took place in New York last year, and there are moves to make the gathering an annual event.

Pompeo will also meet Suga on Tuesday, heading back to Washington in the late evening.