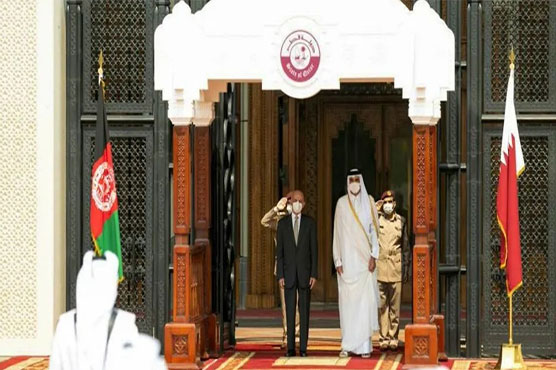 DOHA (AFP) – Afghan President Ashraf Ghani called on the Taliban to “have courage and declare a national ceasefire” on Tuesday as he visited Doha where peace talks between government and Taliban negotiators have stalled.

At the end of a two-day trip, his first to Doha since the talks began, Ghani gave a lecture where he said Afghanistan s long conflict had to be resolved through negotiation, “not under the barrel of the gun”.

“Nobody is going to wipe you out,” he said in front of a socially distanced crowd of diplomats and academics, three weeks after the launch of peace talks between the Afghan government and the Taliban.

Talks between the two sides, hosted by the Gulf state and aimed at ending Afghanistan s 19-year war, have slowed over disagreements on how to frame a code of conduct that will guide the broader talks.

Headline issues, including a ceasefire or the type of governance that will shape Afghanistan s future, have yet to be discussed.

Meanwhile violence continues to rage in Afghanistan, with a suicide attack targeting a provincial governor killing at least eight people on Monday.

The talks, which began with much fanfare, have made little progress but Ghani sidestepped questions over whether they have stalled.

“We cannot end 20 years of war in 20 days,” he told reporters as he left the lecture.

Earlier, Afghanistan s Foreign Minister Muhammad Hanif Atmar reiterated that no agreement had been reached by the two sides on the code of conduct that will govern the talks.

The Taliban and the Afghan government are struggling to agree on common language on two issues before they can establish an agenda.

The Taliban, who are Sunni hardliners, are insisting on adherence to the Hanafi school of Sunni Islamic jurisprudence, but government negotiators say this could be used to discriminate against Hazaras, who are predominantly Shiite, and other minorities.

Another contentious topic is how the US-Taliban deal will shape a future peace deal and how it will be referred to.

“The Afghan team have presented a number of counter proposals to find common ground,” Atmar said, but “they have not reached an agreement on the two issues”.

No official meetings have taken place between the two sides in almost a week. However, both have insisted they continue to informally discuss ways to move forward.

Also in Doha, Zalmay Khalilzad, the US negotiator on Afghanistan, tweeted after a meeting with Ghani that the “president should not let the opportunity for peace to slip away” and that the United states remains ready to assist.