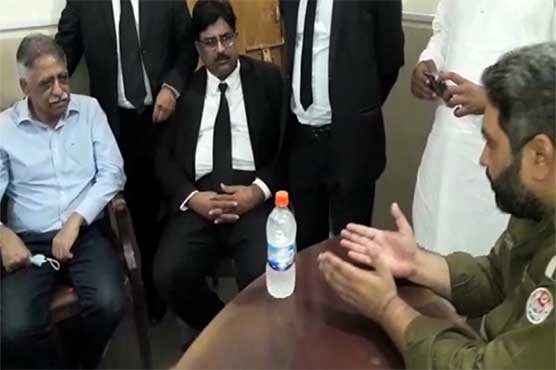 LAHORE (City News) – Spokesperson of Pakistan Muslim League-Nawaz (PML-N) supremo Nawaz Sharif and Maryam Nawaz Wednesday said that no one is willing to take responsibility for the sedition case registered against opposition leaders.

PML-N leaders Muhammad Zubair and Attaullah Tarar met SHO of Police Station Shahdara and discussed the case against the party leaders. Talking to media after the meeting, former Governor Sindh Muhammad Zubair claimed that Prime Minister Imran Khan directly ordered registration of FIR against opposition leaders. Doesn’t matter how many cases are registered by government, workers of PML-N will participate in anti-government movement no matter what, he added.

Muhammad Zubair said that this is the first case of its kind in which the accused came to the police station themselves and the investigation officer disappeared before their arrival.

He said that the speech of Nawaz Sharif was on national issues but PM Imran Khan ordered a sedition case against him. We have not come to blame the SHO or the Chief Minister of Punjab as Imran Khan has given direct instructions to file cases, he added.

The PML-N leader said that we are accused of speaking against the state institutions. Nawaz Sharif saluted and said that he respects every soldier of the army.

On the other hand, SHO Shahdara police station, during meeting with PML-N leaders said that case was registered on complaint of a citizen and police will investigate the issue on merit. SHO further said that the case was registered under his predecessor as he was appointed on the position only two days ago.