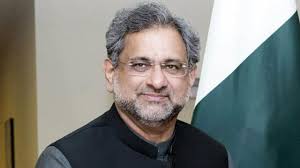 Talking to media person, Pakistan Muslim League-Nawaz (PML-N) senior leader Shahid Khaqan Abbasi challenged government minister to come and arrest the ‘traitors’. “I wanted to know who distributes certificate of patriotism so that I can apply for one”, he asked.

Shahid Khaqan said that a case has been registered against the Prime Minister of Azad Kashmir and those who serve the country including two former prime minister of Pakistan have become traitors today.

Traitors are the ones who stopped work on CPEC and increased problems for masses, he said.

The PML-N leader said that no one talks about public problems and the prime minister is always thinking about arresting opposition leaders. He also asked that will treason cases reduce problems being faced by public.