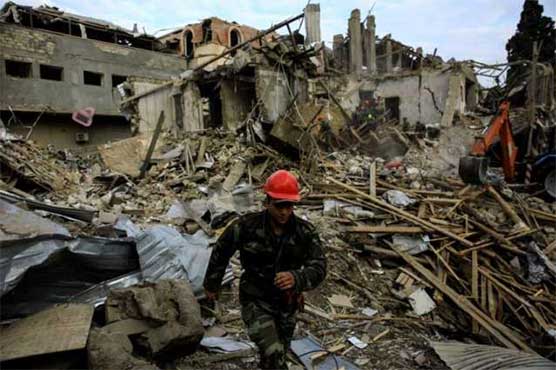 TERTER (AFP) – Armenian and Azerbaijani forces engaged in new fighting on Tuesday over the Nagorno-Karabakh region despite pleas to observe a ceasefire, as the Red Cross warned hundreds of thousands were already affected by the conflict.

US Secretary of State Mike Pompeo urged the sides to observe a ceasefire agreed only four days ago in Moscow, while the group of powers seeking a solution to the conflict warned of “catastrophic consequences” unless immediate steps were taken.

More than two weeks of fighting between the Caucasus rivals has left almost 600 dead, including 73 civilians, according to a tally based on partial tolls from both sides.

The Nagorno-Karabakh region of Azerbaijan, overwhelmingly populated by Armenians, has been controlled by Armenians since a 1990s war that erupted as the Soviet Union fell.

But Azerbaijan has never hidden its desire to win back control and no state has ever recognised Nagorno-Karabakh s declaration of independence.

The fighting has been the most intense since a 1994 ceasefire ended the initial post-Soviet war. Even a humanitarian truce to allow exchanges of prisoners and dead has been too much to implement.

“Homes, businesses and once-busy streets are being reduced to rubble.”

He said hundreds of thousands of people across the region were affected, with healthcare services coming under strain and even attacked in some cases.

The Nagorno-Karabakh separatist authorities accused Azerbaijan of launching an offensive in the south, north and northeast of the region.

Baku in turn accused Armenians of launching strikes on the districts of Goranboy, Terter and Agdam — Azerbaijani territory outside Nagorno-Karabakh.

An AFP correspondent in Terter close to the front line reported hearing heavy shelling nearby and seeing a rocket launcher drive by as Azerbaijani forces sought to fire up into the mountains.

“We ve been here for 16 days,” said Akiif Aslamiv, 62, who has been hunkering down in a basement in Terter. “Every day they shell us, even during the ceasefire. Today and yesterday it was non-stop.”

The daily fighting has made a mockery of the ceasefire agreed between the Armenian and Azerbaijani foreign ministers in the early hours of Saturday in Moscow after 11 hours of talks.

“The United States calls on Azerbaijan and Armenia to implement their commitments to a ceasefire as agreed and cease targeting civilian areas,” Pompeo, whose administration has faced accusations of a lack of engagement in ending the fighting, wrote on Twitter.

The search for a long-term solution to the conflict, one of the most enduring problems left after the fall of the Soviet Union, is in the hands of the Minsk Group of regional powers chaired by France, Russia and the US.

But both sides are heavily entrenched in their views and three decades of diplomacy has brought little progress.

Otherwise there could be “catastrophic consequences for the region”, they added in a statement.

Gela Vasadze, an analyst with Tbilisi-based think tank the Georgian Strategic Analysis Centre, said the current conflict was doing nothing to end the stalemate.

“What is clear is that Azerbaijan did achieve some military success, but not anything dramatic. We can t say Baku is close to taking control of Karabakh,” he told AFP.

Concerns remain over the role of Turkey, which has strongly backed Azerbaijan and has been widely accused of dispatching pro-Ankara Syrian militia to assist Baku.

“Since Russia is on Armenia s side and we, Turkey, support Azerbaijan, let s meet as a foursome to discuss resolving these problems,” said Ibrahim Kalin, the Turkish presidency s head of communications.

“If the Minsk Group hasn t been able to find a solution for more than 30 years, it s time to find a new mechanism.”

According to the Britain-based Syrian Observatory for Human Rights, 1,450 such fighters have gone to Azerbaijan including 250 in the last week alone.

The observatory said 119 of them had died, of whom 78 had been repatriated to Syria.

Armenia is part of a regional Russia-led security group but Moscow has so far refused to become drawn in to the conflict.

Iran, which has borders with both Armenia and Azerbaijan and has expressed alarm over the fighting, said a drone crashed near its border with Azerbaijan and investigators were trying to find out its origin.

Berlin warns Turkey not to squander trust in Mediterranean