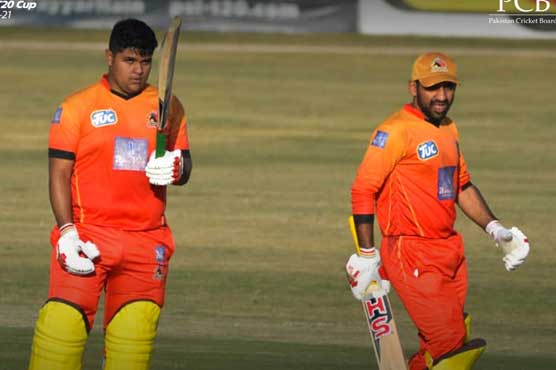 RAWALPINDI (Web Desk) – Sparkling half-centuries by Azam Khan and Sarfaraz Ahmed carried Sindh into the semi-finals of the National T20 Cup with a 25-run win over Northern, the table-toppers, at the Pindi Cricket Stadium on Wednesday.

Azam blasted 88 runs at a staggering strike rate of 204.65 to record what was the 22-year-old’s second half-century of the tournament and third of his overall T20 career.

The right-handed batsman stitched a crucial 130-run stand with his captain Sarfaraz, who stroked a scintillating 52 not out from 28 balls, for the fourth wicket from just 59 balls, which lifted Sindh to an imposing 221 for four.

The two had come together when Saud Shakeel, who replaced Asad Shafiq and scored 25 runs from 18 balls on the back of four fours, was caught by Haider Ali on the last ball of the ninth over on Mohammad Nawaz’s bowling. Sindh, who had been asked to bat first by Northern captain Imad Wasim, were 67 for three at that stage.

The partnership between Azam and Sarfaraz was largely dominated by the former as he contributed 84 runs that came at a strike rate of 233.

Azam stay at the crease was studded by eight sixes and five fours. He was dismissed by Mohammad Amir, who returned two for 42 in four overs after replacing Haris Rauf, on the second ball of the penultimate over.