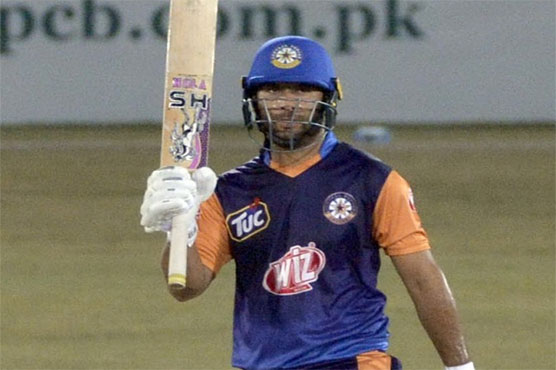 RAWALPINDI (City News) – Central Punjab kept their hopes of a semi-final berth in the National T20 Cup for First XI teams alive by registering a thrilling three-run win over Khyber Pakhtunkhwa in the 26th match of the tournament played at the Pindi Cricket Stadium, Rawalpindi on Tuesday night.

Left-arm fast bowler Waqas Maqsood took three wickets to help restrict Khyber Pakhtunkhwa in their chase despite captain Mohammad Rizwan’s fighting knock of 99 not out. Rizwan almost pulled off a miraculous win when he brought the ask to six runs off the final ball, Central Punjab’s Ehsan Adil held his nerve and conceded only two runs off the last ball after going for 15 runs off the first five balls of the over which started with Khyber Pakhtunkhwa needing 21 runs.

Central Punjab have now played all of their ten matches of which they won four and lost six and have finished with eight points. Balochistan also have eight points but have two games left, a win in either of the two games will confirm their semi-final berth. Northern, Khyber Pakhtunkhwa and Sindh are already through to the last-four of the six-team competition.

On Wednesday night, Khyber Pakhtunkhwa’s chase of 175 runs got off to a disastrous start as Waqas sent back openers Mohammad Haris (1) and Fakhar Zaman (14) with-in the first 13 balls of the chase.

Khyber Pakhtunkhwa’s worries were further increased when Zohaib Khan (1) fell to Ehsan who had returned to Central Punjab’s eleven in place of Usman Qadir.

Shoaib Malik fell for 10 runs while Iftikhar Ahmed was dismissed by Waqas for 21 off 13 balls (two fours and one six) as Khyber Pakhtunkhwa stuttered to 98 for five in 14.5 overs.

Musadiq Ahmed (17) added 57 runs for the sixth-wicket with Rizwan; he was dismissed by Ehsan in the final over of the match in an attempt of clearing the boundary.

Rizwan singlehandedly kept his team in the hunt in his stunning innings that came off 68 balls and included seven fours and six towering sixes but narrowly failed to take his side to an improbable win. For Central Punjab, Waqas took three for 43 while Ehsan took two wickets for 32 runs.

Reflecting on his performance, man-of-the-match Muhammad Akhlaq said: “I want to thank the Almighty first, my target was to take the team to the 170-run mark.

“I am happy that I helped the team reach that mark as the instructions of the captain and the management was to set a total past the 170-run mark and we succeeded in achieving our target with a good finish in the death overs.”

Khyber Pakhtunkhwa asked Central Punjab to bat first after winning the toss; Central Punjab lost the big wicket of Kamran Akmal for a duck in the second over with Imran Khan having him caught behind by wicketkeeper Haris.

Captain Babar Azam was joined by Abdullah Shafiq, the two laid the foundations of Central Punjab’s total with an 80-run partnership off 63 balls. Imran made another big breakthrough when he had Babar caught by Mohammad Rizwan for 39 off 33 balls (three fours, one six).

Abdullah posted his second half-century of the tournament, besides the fifties, the right-hander had hit a century on his T20 debut which was Central Punjab’s opening match against Southern Punjab. Abdullah hit five fours and two sixes in his 63-run innings today which took 48 balls.

Central Punjab were then well served by man-of-the-match Muhammad Akhlaq who repaid the faith of his management in his abilities (earned a call-up in the First XI squad for the Rawalpindi-leg) following his fine run in the National T20 Cup for Second XI teams at Gaddafi Stadium Lahore with a dazzling unbeaten 50 off 29 balls. Akhlaq hit four fours and three sixes, all three sixes came off one Shaheen Shah Afridi over (17th over of the innings).

Central Punjab ended their innings at 174 for four; Imran Khan and Usman Shinwari took two wickets each for Khyber Pakhtunkhwa.