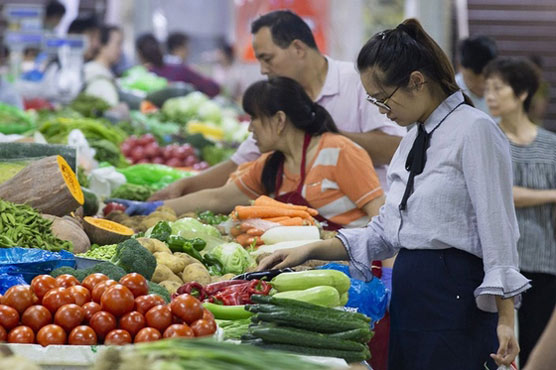 BEIJING (AFP) – The rise in Chinese consumer prices slowed for a second successive month in September, official data showed Thursday, as pork supplies bounce back from the devastating African swine fever while farms recovered from flooding.

The consumer price index (CPI), a key gauge of retail inflation, rose 1.7 percent last month from a year ago, compared with a 2.4 percent reading in August, according to the National Bureau of Statistics (NBS). The increase was also less than expected.

Food prices have begun to stabilise after months of huge rises fuelled by the swine fever, which ravaged pig herds across the country and sent the cost of pork rocketing, in turn pushing up demand for other meat.

He noted that core consumer price inflation, which strips out food and energy prices, rose 0.2 percent on-month — “the fastest pace since the Covid-19 outbreak”.

The producer price index (PPI), which measures the cost of goods at the factory gate, fell 2.1 percent on-year — more than the 1.8 percent drop forecast in a Bloomberg poll of analysts.

The International Monetary Fund this week forecast China will be the only major economy to grow this year as it rebounds from the devastation caused by the coronavirus.

“Industrial production has reached its potential level and we are waiting for the recovery of the service sector,” Zhaopeng Xing, China markets economist at ANZ Research, told AFP.

“I think the progress is going well.”

US dollar slides to lowest level in almost 5 months