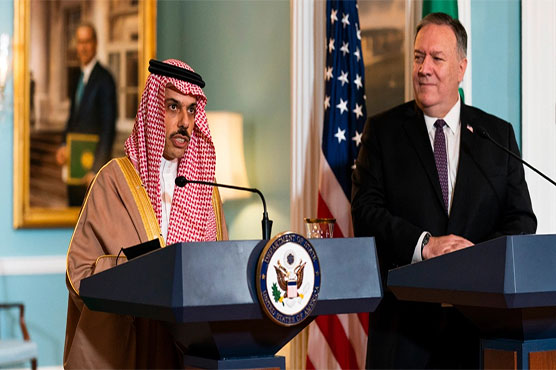 WASHINGTON (AFP) – US Secretary of State Mike Pompeo on Wednesday encouraged Saudi Arabia to recognize Israel, in what would be a massive boost for the Jewish state amid normalization by two other Gulf Arab kingdoms.

Bahrain, which tightly coordinates its foreign policy with Saudi Arabia, and the United Arab Emirates on September 15 signed the so-called Abraham Accords with Israel at the White House.

“They reflect a changing dynamic in the region, one in which countries rightly recognize the need for regional cooperation to counter Iranian influence and generate prosperity,” Pompeo said.

“We hope Saudi Arabia will consider normalizing its relationships as well. We want to thank them for the assistance they ve had in the success of the Abraham Accords so far.”

President Donald Trump has highlighted Arab normalization with Israel as a major achievement as he seeks another term in November 3 elections, with his evangelical Christan base widely supportive of the Jewish state.

Gulf Arab kingdoms have found common cause with Trump in his hawkish line against regional rival Iran.

The administration in turn has been sparing in raising human rights concerns with the Arab allies, including over the killing two years ago of US-based writer Jamal Khashoggi at a Saudi consulate.

In a controversial move that triggered an internal probe, Pompeo last year cited a crisis with Iran to bypass Congress to push ahead $8 billion in arms sales to Saudi Arabia.

Lawmakers across party lines have been appalled by the heavy toll on civilians, including destruction of schools and hospitals, in Saudi Arabia s campaign against Iranian-backed Huthi rebels in Yemen.

Pompeo also announced that the United States had acquired a 26-acre (10.5-hectare) site to build a new US embassy in Riyadh.

Alongside work on US missions in Jeddah and Dhahran, the United States is spending more than $1 billion on diplomatic construction in the kingdom, Pompeo said.

US dollar slides to lowest level in almost 5 months