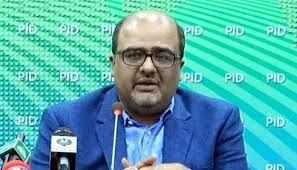 Shehbaz Sharif, his companions have no answer about their corruption: Shahzad Akbar

ISLAMABAD (City News) – Adviser to Prime Minister on Accountability and Interior Barrister Mirza Shahzad Akbar on Thursday has said that Pakistan Muslim League-Nawaz (PML-N) president and Opposition Leader in National Assembly (NA) Shehbaz Sharif and his companions have no answer about their corruption.

While talking to media, the adviser said that PML-N leaders used to carry out corruption in the name of business. They have laundered over Rs15 billion by using names of 12 employees, he told.

Shahzad Akbar further called Shehbaz Sharif as ‘China’s Habib Jalib’ over his drama in the court.

Meanwhile, he asked Shehbaz Sharif about Masroor Anwar and Shoaib Qamar who were arrested over embezzlement charges. He also questioned the PML-N leader over the business of Sharif family and their four flats in London.

his companions have no answer about their corruption: Shahzad Akbarshehbaz sharif
0 103
Share FacebookTwitterWhatsAppPinterestEmailFacebook MessengerTelegram