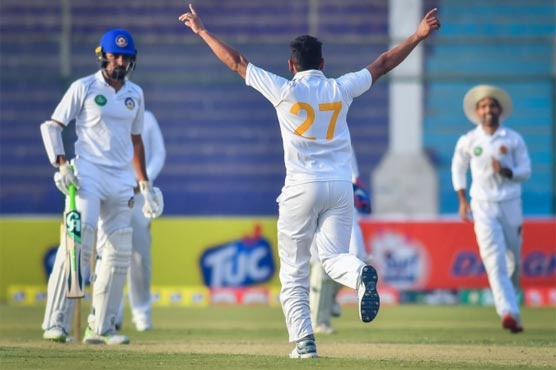 KARACHI (City News) – Southern Punjab’s wrist spinner Zahid Mahmood edged closer to the 100-wicket mark in first-class cricket as he helped his side to spin out Northern for a paltry 165 on day one of the first round first-class Quaid-e-Azam Trophy fixture at the National Bank of Pakistan Sports Complex on Sunday, pcb.com.pk said.

Zahid carried his white-ball form from the National T20 Cup into the longer version of the game by returning figures of 9.4-2-41-4 to take his tally of first-class wickets to 96 in his 40th match.

Thirty-two years old Zahid was well supported by off-spinner Salman Ali Agha, who bagged three for 34, as Northern lost their last eight wickets for 91 runs to be left to rue their decision of batting first after winning the toss.

Test opener Shan Masood ensured he continued the good work of his bowlers when he carried his side to 174 for one in 40 overs. Shan, one of the most consistent batsmen in the domestic circuit for the past couple of years across all formats, has hit 10 fours in a 120-ball 80 not out.

With him at the crease was Hussain Talat, who was unbeaten on 53 as they two batsmen have added 89 runs for the unfinished second wicket.

Earlier, Shan had provided Southern Punjab a solid start by adding 85 runs for the first-wicket with Umar Siddique (40).

Southern Punjab earned three points for claiming eight wickets and then added another three points for bowling Northern out in less than 100 overs. Northern, on the contrary, failed to earn any point on the opening day after failing to reach 200 runs or picking up a minimum of three wickets. However, Northern will have a chance to pocket bowling points when play resumes on Monday while Southern Punjab will aim to secure maximum batting points.

In the broadcast National Stadium match produced by the Pakistan Cricket Board, defending champions Central Punjab laboured to 205 for nine in 86 overs against Sindh.

The major disappointment in the match was the failure of Azhar Ali, who dragged a wide ball from Mir Hamza onto his stumps after scoring 11.

30-year-old Quetta-born Bismillah Khan became the first batsman to stroke a century in the 2020-21 event as he steered Balochistan to 310 for seven in 89 overs against Khyber Pakhtunkhwa at the UBL Sports Complex.

Bismillah was unbeaten on 102, an innings that is laced with 12 fours from 200 balls.

Kashif showed he was no rabbit with the bat when he scored 98, missing his third first-class century by two runs. He hit 19 fours in a 126-ball knock.

At the NBP Sports Complex, Northern won the toss and elected to bat first

At the NSK, Sindh won the toss and elected to bowl first

At the UBL Sports Complex, Balochistan won the toss and elected to bat first