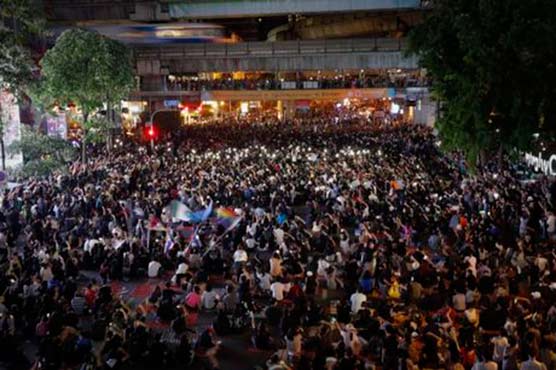 Prayut, the former military chief who staged the 2014 coup, has faced increasing pressure in recent weeks from tens of thousands of protesters demanding his resignation.

The student-led rallies are calling for Prayut’s resignation, a rewrite of the military-scripted constitution and an end to alleged government harassment of political opponents.

“Though the people have the freedom to protest based on the constitution, authorities need to control the illegal protests,” said Prayut, who recalled parliament from recess last week.

“We do not want to see clashes or riots in the country,” he said, accusing some protesters of “inappropriate actions”.

While Prayut acknowledged the protesters’ demands in his opening speech, the two-day parliamentary session has not listed them on its agenda.

However, an incident this month when protesters flashed three-finger salutes — a symbol of their movement — at Queen Suthida’s motorcade is up for discussion.

Such an overt challenge is unprecedented in Thailand, where the royal family is protected under harsh anti-defamation laws and criticism of them is taboo.

“The protesters say it was not in the plan for the Queen to pass that way, but the government says she can go anywhere,” said Tankhun Jittitsara, one of the secretaries of House Speaker Chuan Leekpai.

“No one knows the truth so we’ll talk about that.”

After that incident, the premier imposed emergency measures banning gatherings of more than four, while authorities arrested scores of activists.

Three activists were also charged under a rarely used law banning “violence against the Queen”, which carries a maximum sentence of life in prison.

Prayut revoked the emergency measures a week later when they failed to discourage thousands turning up in “guerrilla” protests across Bangkok.

The demands for royal reform from some protesters include the abolition the royal defamation law, a clear accounting of the palace’s finances, and a call for King Maha Vajiralongkorn to stay out of politics.

Pro-royalist groups have emerged in response to these unprecedented challenges, holding counter-rallies to pronounce their love for the king.

On Monday, dozens of supporters in yellow shirts — the royal colour — gathered outside Parliament, telling MPs not to reform the monarchy.

“We do not want the monarchy topic to be discussed in parliament,” said Suwit Thongprasert, a prominent royalist activist.

“We are ready to protect the monarchy.”

A student group has called for anti-government protesters to march Monday afternoon to the German embassy — in apparent defiance to the king, who has spent long stints of time in Germany.