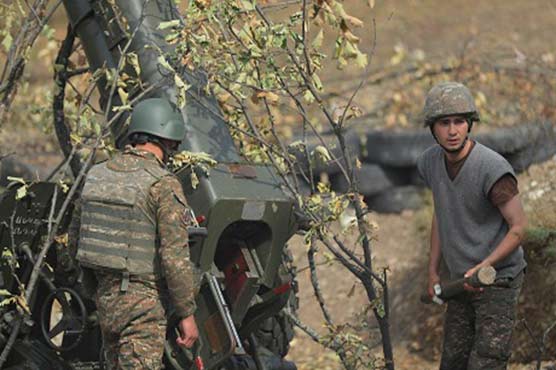 STEPANAKERT (AFP) – A third attempt at halting weeks of fighting over Nagorno-Karabakh collapsed quickly on Monday with Armenia and Azerbaijan trading accusations of violating the US-brokered ceasefire within minutes.

As fighting over the disputed region enters its second month, international mediators are scrambling to bring a stop to frontline clashes and shelling of civilian areas that have left hundreds dead.

The latest “humanitarian ceasefire” was announced by Washington on Sunday, after truces brokered by Russia and France fell apart over previous weekends.

It took less than an hour after the ceasefire was due to begin at 8:00 am (0400 GMT) for the first accusations to be made.

Azerbaijan’s foreign ministry said Armenian forces had shelled the town of Terter and nearby villages in “gross violation” of the truce.

Armenia’s defence ministry said Azerbaijani forces had “grossly violated” the ceasefire with artillery fire on combat positions in various parts of the frontline.

Azerbaijan and Armenia have been locked in a bitter conflict over Karabakh since Armenian separatists backed by Yerevan seized control of the mountainous province in a 1990s war that left 30,000 people dead.

Karabakh’s self-declared independence has not been recognised internationally, even by Armenia, and it remains a part of Azerbaijan under international law.

The current fighting broke out on September 27. Armenia and Azerbaijan accuse each other of having targeted civilians and of breaking the previous truces. Repeated calls for calm do seem to have had any effect.

After coming under heavy shelling at the start of the fighting, Nagorno-Karabakh’s main city Stepanakert has been quieter in recent days.

AFP journalists in the city on Monday said the night had been calm. Ten minutes before the ceasefire took effect an explosion was heard and a plume of smoke seen on a nearby hill.

There were fewer sounds of fighting coming from the frontline on Monday morning than in previous days, though rounds of shelling could be heard in the distance.

More than 1,000 people have been reported dead in the fighting, mainly Armenian separatist fighters but also dozens of civilians.

Azerbaijan has not released any figures on its military casualties and the death toll is believed to be substantially higher, with Russian President Vladimir Putin saying last week that close to 5,000 people had been killed.

Russia, France and the United States are leaders of the “Minsk Group” which has failed since the 1990s to bring about a negotiated settlement to the conflict.

This year’s fighting is the heaviest since a 1994 ceasefire, raising fears that Azerbaijan’s ally Turkey and Russia, which has a military alliance with Armenia, could be further drawn into the conflict.

The latest ceasefire push came after US Deputy Secretary of State Stephen Biegun met in Washington Saturday with Armenian Foreign Minister Zohrab Mnatsakanyan and Azerbaijani Foreign Minister Jeyhun Bayramov and the co-chairs of the Minsk Group.

US Secretary of State Mike Pompeo tweeted that the negotiations had been “intensive”.

The State Department said the Minsk co-chairs and the foreign ministers “agreed to meet again in Geneva on October 29” to seek “all steps necessary to achieve a peaceful settlement of the Nagorno-Karabakh conflict”.

Azerbaijan has claimed to be making significant gains since the fighting began by retaking areas it lost in the 1990s war, in particular in a buffer zone outside Karabakh seized by the Armenians.

Armenia has admitted to suffering losses and called on volunteers to join the fighting at the front.