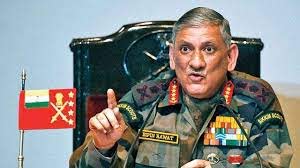 MUMBAI (City News) – Indian Chief of Defense Staff (CDS) General Bipin Rawat on Tuesday said that corruption has been one of the main obstacles to economic, political and social progress of his country.

In a video message, the Indian Army Chief can be seen saying, “I believe that all stakeholders such as government, citizens and private sector need to work together to eradicate corruption.”

I realize that every citizen should be vigilant and commit to higher standards of honesty and integrity at all times and support the fight against corruption, he added.