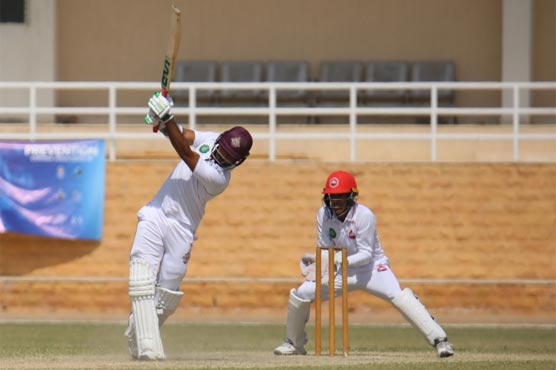 KARACHI (City News) – A maiden double-century by Hussain Talat and 15th first-class century by Test opener Shan Masood put Southern Punjab in a commanding position against a hapless Northern on the second day of the four-day first round Quaid-e-Azam Trophy fixture at the National Bank of Pakistan Complex on Monday, pcb.com.pk said.

Hussain, playing his 41st first-class match, clubbed 33 fours and six sixes in a 310-ball 253, while Shan belted 17 fours in a 185-ball 134 as Southern Punjab declared their first innings at 507 for nine in reply to Northern’s 165 after starting the second day’s proceedings at the overnight score of 174 for one.

When stumps were called for the day, Northern, 342 runs in arrears, were jolted by Test fast bowler Mohammad Abbas (two for 13) as they finished at 31 for three and facing the prospects of an innings defeat as they still require 311 runs to make Southern Punjab bat again.

Shan and Hussain, who resumed on 80 and 53 runs, respectively put on 185 runs for the second wicket, while Hussain added another 63 runs for the seventh wicket with Bilawal Bhatti (31).

Hussain occupied the crease for over five hours and reached his century from 149 balls with 14 fours and two sixes. His double-century came off 237 balls with 28 fours and four sixes.

For Northern, their captain Nauman Ali returned figures of four for 153, while Athar Mehmood bagged three for 86.

An interesting match was developing at the National Stadium where Fawad Alam was leading Sindh’s fightback against defending champions Central Punjab in the broadcast match being produced by the Pakistan Cricket Board.

After Central Punjab added two more runs to their overnight score of 205 for nine to be bowled out for 207 in 86.4 overs, they hit back to reduced Sindh to 113 for six before Fawad Alam fought gallantly to see his side to 196 for six from 80 overs at stumps, still 11 runs behind.

Fawad, who has added 83 runs for the unfinished seventh wicket with Tabish Khan (17 not out), has been batting for over four hours for his 90 not out in which he has faced 265 balls off which seven have been converted into fours.

When play ended Balochistan, who scored 362 in the first innings, had reached 34 for one to lead Khyber Pakhtunkhwa by 229 runs with nine second innings wickets intact.

For Khyber Pakhtunkhwa, Khalid Usman (57 not out), Kamran Ghulam (42) and Sajid Khan (27) were the notable run-scorers.

Earlier, Balochistan resumed their first innings at the overnight score of 310 for seven and were dismissed for 362 in 110.2 overs. Bismillah Khan, who began at 102, was out after scoring 118, an innings that came off 242 balls and included 13 fours.

Together with Khurram Shahzad (37), Bismillah added 52 runs for the eighth wickets.

Scores in brief after day two of four

At the NBP Complex, Northern won the toss and elected to bat first

At the NSK, Sindh won the toss and elected to bowl first

At the UBL Sports Complex, Balochistan won the toss and elected to bat first