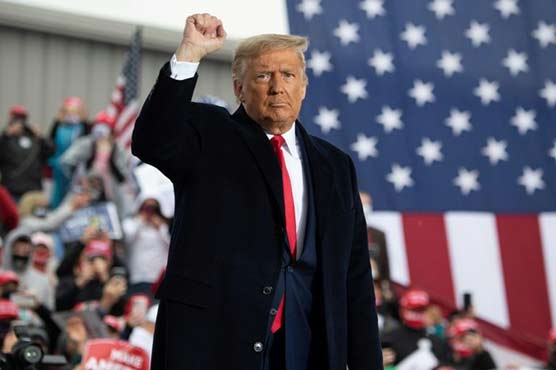 WASHINGTON (AFP) – President Donald Trump’s struggling reelection campaign received a boost Monday with the confirmation of his latest Supreme Court nominee, tilting the top body to the right and clinching his judicial legacy in a landmark victory for American conservatives.

The Republican-controlled Senate elevated Amy Coney Barrett to the lifelong position in a 52-48 vote, capping a rapid and deeply contentious process that makes her the sixth conservative, and third Trump appointee, on the nine-member court.

“This is a momentous day for America, for the United States Constitution and for the fair and impartial rule of law,” the president, standing alongside Barrett, said before beaming lawmakers and others who had gathered on the South Lawn of the White House.

Barrett, 48, assures a strong conservative judicial legacy for Trump, who has also been able to appoint dozens of young, right-wing judges to federal courts in his four years in office.

Democrats have fumed over the process that confirmed a justice so close to a presidential election, and warn that Barrett might vote to overturn the landmark 1973 decision that protects abortion rights, or to gut health care provision for millions of Americans.

But Barrett, who took a constitutional oath at a Monday night ceremony, said she would keep her personal beliefs and judicial work separate.

“I will do my job without any fear or favor, and… I will do so independently of both the political branches and of my own preferences.”

With eight days until the November 3 election, the confirmation marks an undeniable victory for the president to tout as he barnstorms battleground states in a final bid to claw back ground against Democrat Joe Biden.

The confirmation during an election “should be a stark reminder to every American that your vote matters,” Biden said in a statement late Monday.

It remains to be seen whether the confirmation can be a game-changer for the Republican president, accused by his rival of abandoning the fight against Covid-19 with polls showing voters overwhelmingly disapprove of his pandemic response.

Trump denied any surrender earlier Monday as he landed in swing state Pennsylvania for a trio of rallies and insisted, despite a new surge in infections, that the pandemic is in retreat.

“We’re absolutely rounding the corner,” he said in Allentown.

But the president betrayed his frustration at the health crisis dragging on his reelection hopes, with a tweet complaining about media coverage of “COVID, COVID, COVID, all the way to the Election.”

While Barrett’s confirmation provided a happy distraction for Trump, the virus is ever-present.

More than 225,000 Americans have died, cases are spiking in several states and hopes have dimmed that a trillion-dollar coronavirus relief package could pass Congress before election day.

Jitters over the resurgent pandemic weighed on markets, with the Dow Jones Industrial Average closing 2.3 percent down in its worst session in weeks.

Trump kept his game face on as he touted his economic record, saying voters had “a choice between a Trump super-recovery and a Biden depression.”

Complicating Trump’s argument that America has the upper hand against the virus, his chief of staff Mark Meadows conceded Sunday that “we are not going to control the pandemic,” and that the focus was now on mitigation.

Meadows’ comments drew a rebuke from the head of the World Health Organization, Tedros Adhanom Ghebreyesus, who warned it was “dangerous” to give up on attempts to stamp out the virus.

Biden, meanwhile, in a surprise campaign stop Monday at a polling station in Chester, Pennsylvania, seized on the “deadly admission” from the White House.

Earlier, Biden said Trump was waiving “the white flag of defeat” and hoping the virus — which has set records for new cases in recent days, with nearly 90,000 on Saturday — would just go away.

Biden, 77, has mounted a far more cautious in-person campaign than Trump due to coronavirus concerns.

But he said he will hit the trail in coming days, beginning Tuesday in Georgia, a reliably red state that is suddenly in play, followed by battlegrounds Florida, Iowa and Wisconsin.

“In 8 days, we’re going to take our democracy back,” tweeted the former vice president, who leads Trump in the polls both nationally and in half a dozen key battlegrounds including Pennsylvania.

As of Monday, 64 million Americans — wary of the health dangers of crowded polling booths, and energized by a race framed as critical — had cast early ballots, far surpassing the total of 58 million pre-election ballots cast in 2016.

And with data showing Democrats have an edge in terms of early ballots cast, even Republican leaders have begun to recognize that Trump’s presidency may be imperiled.

“A lot of what we’ve done over the last four years will be undone, sooner or later, by the next election,” Senate Majority Leader Mitch McConnell said Sunday.

But on Monday, as Democrats lamented Barrett’s confirmation, calling it an “unjustifiable” move that will shatter Republicans’ credibility, McConnell was blunt.

“You can’t win ‘em all,” the Republican leader said in a floor speech, “and elections have consequences.”