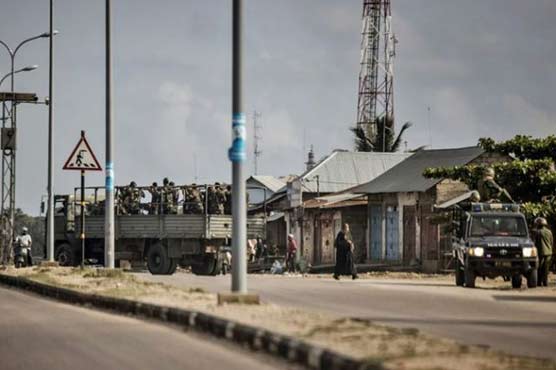 STONE TOWN (AFP) – The leader of the opposition in Zanzibar has been arrested and three people killed, his party said Tuesday as chaos erupted on the semi-autonomous archipelago ahead of Tanzania’s election.

Opposition leader Seif Sharif Hamad, who is taking his sixth shot at the top office, was hauled away by police as he arrived at a polling station in Garagara neighbourhood to try and cast his ballot on a day of early voting set aside mainly for security forces.

His opposition ACT-Wazalendo (Alliance for Change and Transparency) party wrote on Twitter that Hamad “has been arrested”, a day before presidential and parliamentary elections are held in Zanzibar and on the Tanzanian mainland.

Shortly before his arrest, police fired teargas and live rounds, and brutally beat a young man around the Mtupepo primary school where the polling station is located in an opposition stronghold, an AFP reporter saw.

The opposition believes the special day of early voting for security forces is a ploy to steal the election on an island with a history of contested polls, and urged supporters to go out and vote on the same day.

Violence erupted Monday night on Pemba, an opposition bastion, as the army distributed ballots which opposition supporters believed were pre-marked.

“Verified reports from Pemba in Zanzibar indicate that three citizens have been shot dead by the police using live ammunition,” read a statement from ACT-Wazalendo on Tuesday.

The party named the three dead, as well as nine who were injured.

“We call upon the regional and international community to persuade the Tanzanian and Zanzibar governments to allow a free and fair election to run free of violence and intimidation over the next two days.”

There was a heavy presence of police and soldiers across the islands.

A group of around six officers mercilessly beat a young man with their guns and batons before loading him into the back of their car.

Journalists were chased away from the scene.

Sectarian and political tensions in Zanzibar — with a cosmopolitan population of Arabs, Asians and Africans — are more marked than on the mainland.

The archipelago joined with then-Tanganyika to form Tanzania in 1964, and Tanzania’s ruling Chama Cha Mapinduzi (CCM) party has been in power ever since.

“The colonisers (mainland) have oppressed us enough, so take this election very seriously … we are ready to die for Zanzibar,” the 77-year-old Hamad told his final campaign rally on Sunday.

Hamad believes every vote has been stolen from him since the introduction of multiparty democracy in 1995, and foreign observers have often agreed.

In January 2001, at least 30 people were killed in clashes between police and opposition supporters after a disputed election.

Polls in 2005 were also marred by clashes.

A political deal allowing for more power-sharing led to peaceful elections in 2010, but divisions quickly returned and in 2015, the head of the electoral commission cancelled the vote outright.

In 2016, the opposition boycotted the re-run and the CCM was declared the victor.

Twitter was down across the country with President John Magufuli and the mainland’s opposition party Chadema leader, Tundu Lissu due to wrap up their campaigns on Tuesday.

Two dead, several wounded in attack on Afghan police base