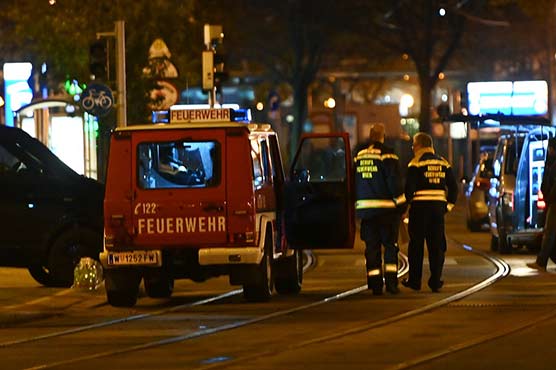 Support pours in for Austria after terror attack

PARIS (AFP) – Three people including one attacker were killed in central Vienna on Monday evening in what Austrian Chancellor Sebastian Kurz described as a “repulsive terror attack”.

Here are the main reactions so far to the shootings, which police said began at around 8:00 pm (1900 GMT) and took place at six different locations:

“We are experiencing difficult hours in our republic,” Chancellor Kurz said on Twitter.

“Our police will act decisively against the perpetrators of this repulsive terror attack. We will never be intimidated by terrorism and we will fight this attack with all means.”

Germany vowed not to “give in to hate that is supposed to divide our societies”.

“Even if we can’t yet foresee the extent of the terror, our thoughts are with the wounded and the victims in these difficult hours,” the foreign ministry wrote on Twitter, calling the news from neighbouring Austria “horrifying and disturbing”.

British Prime Minister Boris Johnson tweeted that he was “deeply shocked” by the night’s events and that the “UK’s thoughts are with the people of Austria — we stand united with you against terror”.

Italian Prime Minister Giuseppe Conte said there was “no room for hatred and violence in our common European home”, while his foreign minister Luigi Di Maio tweeted that “Europe must react”.

European Council chief Charles Michel said: “Europe strongly condemns this cowardly act that violates life and our human values. My thoughts are with the victims and the people of #Vienna in the wake of tonight’s horrific attack. We stand with Austria.”

EU Commission President Ursula von der Leyen tweeted that she was “shocked and saddened”, and that her “thoughts are with the families of the victims and the Austrian people”.

The president of the European Parliament, David Sassoli, said he felt “sadness and horror” and the EU’s top diplomat Josep Borrell called it “a cowardly act of violence and hate”.

In the Czech Republic, which neighbours Austria, Prime Minister Andrej Babis said he was “horrified by the attack” and wanted to “express my solidarity to all people in Austria and my friend Sebastian Kurz”.

Czech police said they had started random checks on the country’s border with Austria.

“Police are carrying out random checks of vehicles and passengers on border crossings with Austria as a preventive measure in relation to the terror attack in Vienna,” Czech police tweeted.

Police also said they had stepped up “supervision over major Jewish facilities in the Czech Republic” in a preventive measure that “reflects developments not only in neighbouring Austria”.

Greek Prime Minister Kyriakos Mitsotakis tweeted that he was “shocked by the horrific attacks in #Vienna” and had offered Kurz Athens’ “full solidarity”.

“Our thoughts are with the people in Vienna and the authorities dealing with the situation. Our hearts, with the victims and their loved ones,” Mitsotakis added.

US President Donald Trump tweeted that his prayers were with all Austrians.

“These evil attacks against innocent people must stop. The U.S. stands with Austria, France, and all of Europe in the fight against terrorists, including radical Islamic terrorists,” he said.

“We condemn in the strongest terms possible this act of terrorism,” he said. “Our thoughts are with the people of Austria and everyone affected by this deplorable act.”

Narendra Modi also tweeted that he was “deeply shocked and saddened by the dastardly terror attacks in Vienna”.

He said India stands with Austria during this tragic time, and that his thoughts and prayers were with the victims and their families.

Morrison said: “The situation remains fluid and details of the attack are still not clear,” and he offered the Austrian chancellor and the country’s people his thoughts and assurances.